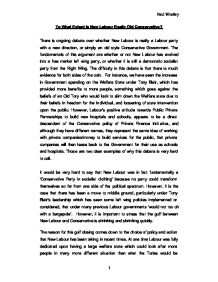 To What Extent Is New Labour Really Old Conservative?

To What Extent Is New Labour Really Old Conservative? There is ongoing debate over whether New Labour is really a Labour party with a new direction, or simply an old style Conservative Government. The fundamentals of this argument are whether or not New Labour has evolved into a free market left wing party, or whether it is still a democratic socialist party from the Right Wing. The difficulty in this debate is that there is much evidence for both sides of the coin. For instance, we have seen the increase in Government spending on the Welfare State under Tony Blair, which has provided more benefits to more people, something which goes against the beliefs of an Old Tory who would look to slim down the Welfare state due to their beliefs in freedom for the individual, and loosening of state intervention upon the public. However, Labour's positive attitude towards Public Private Partnerships to build new hospitals and schools, appears to be a direct descendant of the Conservative policy of Private Finance Initiative, and although they have different names, they represent the same idea of working with private companies/money to build services for the public, that private companies will then lease back to the Government for their use as schools and hospitals. ...read more.

The 'New Deal' was introduced in order to balance providing for the individual and encouraging the unemployed back into work. After people had been receiving unempoloyement benefit for a length of time, the government paid for that individual to receive training to do a particular job. However, these jobs tend to be low paid; yet if the positions weren't accepted, the individual lost their claim for benefit. These 'welfare to work' schemes are negatively looked upon by traditional Labour members and voters. This is because it adds limits on to what the government will support the individual, something that wouldn't have happened in an old Labour government. These schemes have more in common with left wing voters, who believe that there should be less dependency on the state. When the Conservative governments in the 70'sand 80's used PFI (Private Finance Initiatives) it was highly controversial and it was the Labour party themselves who came out and openly criticised the government for using private money to build schools and hospitals, that should be built using government money, and that health and education should not be in the hands of private organisations, the should be under the rule of the government. Labour promised to scrap the use of these initiatives 'if and when they came to power'. ...read more.

The Third Way is where middle ground is sought on matters. The definition of Third way politics is that it 'has a core concern for social justice, and promotes social inclusion and the fostering of an active civil society where community and state act in partnership' (Courtesy of LSE). However, critics of Third Way politics, simply say that the Third Way is only what the current government thinks a good thing. Believing in Crime reduction, justice and social inclusion, are all good things, things that most parties would agree on. Some would argue that the Third Way was conservative policy, simply dressed up with the PR - friendly image of New Labour. Yet, it seems increasingly like the New Labour Party has found ground that takes a left and right wing policies. In conclusion I would say that the lines between New Labour and Conservative thinking is rather blurred. The gap between the two has grown smaller every year. The New Labour party has quite obviously come to the middle ground, and in doing so has taken a conservative point of view in many policy decisions, however, this party is increasingly coming across like a left wing party than right, because they are alienating more and more members from the traditional Labour ranks. However, there is no danger of this party turning Conservative. Paul Whalley 1 ...read more.