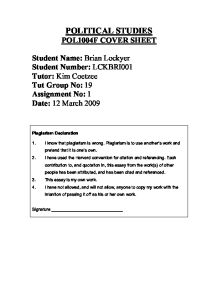 What are the major threats to democracy?

POLITICAL STUDIES POL1004F COVER SHEET Student Name: Brian Lockyer Student Number: LCKBRI001 Tutor: Kim Coetzee Tut Group No: 19 Assignment No: 1 Date: 12 March 2009 Plagiarism Declaration 1. I know that plagiarism is wrong. Plagiarism is to use another's work and pretend that it is one's own. 2. I have used the Harvard convention for citation and referencing. Each contribution to, and quotation in, this essay from the work(s) of other people has been attributed, and has been cited and referenced. 3. This essay is my own work. 4. I have not allowed, and will not allow, anyone to copy my work with the intention of passing it off as his or her own work. Signature ______________________________ What are the major threats to democracy in a modern society? There are many threats to democracy in modern societies; these threats however, differ depending on the type of democracy implemented and the nature of the society, for example; the democracies of the developing world are confronted with different threats when compared to the threats faced by the democracies of the developed world. ...read more.

One of the main perquisites that are conducive to the formation of a democratic state is the constant need for continual economic development; therefore it is evident that a lack of economic development in a particular country will pose a major threat to the prevalence and advancement of democratic ideologies in that country. Economic development is an idea supported by Lipset (1959). Economic development is considered one of the main necessities needed to guide a state into democracy. Lipset believes that 'the correlation between the existence of democracy and such variables as per capita wealth, industrialization, urbanization and the level of education', are causes of democracy. This underlines and demonstrates the insurmountable obstacles faced by many parts of the world, most notably the developing world in terms of maintaining and encouraging democratic influences. Poverty and unemployment are rife throughout the developing world and therefore the ever-rising unemployment levels coupled with exponential population growth is crippling the economies of many nations which is rendering these nations susceptible to adhering to the conditions necessary for the instilment of other forms of political governance which obviously, poses a threat to existing and potential democratic prevalence and advancement throughout modern society. ...read more.

Democracy is more likely to come about from a society where, for example, the monarchy checks the nobility and the aristocracy goes into commerce. (Pinkney, 1993). We can see this in states that have conventionally had monarchs or upper class forced hierarchy ruling, such rulers are more prone to alter the political requirements of a democracy once the totalitarian regime has been lifted. From the arguments gathered above, it is easy to see the most prominent threats to democracy that are currently facing modern societies. The necessities needed to attain democratic rule portray how far some states are from acquiring and implementing a democratic status. It is evident that economic development is the main threat that is preventing many nations from adhering to the criteria necessary to implement and obtain democratic systems. The other factor that is hindering the advancement of democratic systems is the complex social structure of many developing nations due to the effects of colonization. The divisions and creation of isolated ethnic minorities caused by the colonization and decolonisation processes has made it extremely difficult for democracy to achieve fair and equal ruling that would be so beneficial for the many social groups within a society. ...read more.