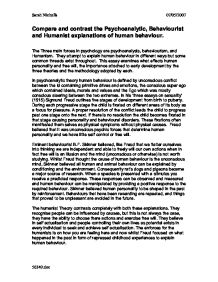 Compare and contrast the Psychoanalytic, Behaviourist and Humanist explanations of human behaviour.

Compare and contrast the Psychoanalytic, Behaviourist and Humanist explanations of human behaviour. The Three main forces in psychology are psychoanalysis, behaviourism, and Humanism. They attempt to explain human behaviour in different ways but some common threads exist throughout. This essay examines what effects human personality and free will, the importance attached to early development by the three theories and the methodology adopted by each. In psychoanalytic theory human behaviour is defined by unconscious conflict between the Id containing primitive drives and emotions, the conscious super ego which contained ideals, morals and values and the Ego which was mostly conscious steering between the two extremes. In his 'three essays on sexuality' (1915) Sigmund Freud outlines five stages of development from birth to puberty. During each progressive stage the child is fixated on different areas of its body as a focus for pleasure. A proper resolution of the conflict leads the child to progress past one stage onto the next. If there is no resolution the child becomes fixated in that stage causing personality and behavioural disorders. These fixations often manifested them selves as physical symptoms without physical causes. Freud believed that it was unconscious psychic forces that determine human personality and we have little self control or free will. ...read more.

If parents offer only conditional positive regard -valuing the child only when it is behaving correctly - the child is likely have a distorted self concept and learns to act in ways that earn approval from others rather than in ways that may be intrinsically more satisfying and real, which may lead to problems later on. According to Freud 's Theory early development is more than just important, it is all defining as the sexual drive and experiences in this period determines adult personality and any behavioural problems stem from this period. Between birth and 18 months the child has to progress through the oral stage when the main focus is the mouth. The child gets pleasure from sucking and biting. Insufficient feeding of sucking at this stage can lead to an oral sadistic fixation. Symptoms of this in adults would be sarcasm, nail biting and constant chewing. Over oral stimulation in this stage is likely to produce a person who is reliant on others and cheerfully gullible, could be described as a 'sucker'. Once this stage has been resolved the child moves on to the anal stage which lasts till the age of about three years. In this stage the main focus of pleasure is bowel movements and the control over them. ...read more.

The behaviourists insist psychology should be the study of overt behaviour rather than the inner workings of the mind. They say that the case studies of Freud and the humanists could not be proven so didn't hold any value. The behaviourist research was carried out in a scientific manor in laboratory conditions. Behaviourist Psychologist's Watson and Raynor carried out research on an eleven month old boy called little Albert. Albert played happily with a white rat in the laboratory, he was unafraid of it. Watson banged a steel bar with a hammer behind Albert's head (out of his view). This frightened Albert and made him cry. This was repeated five times, after which Albert had learned to fear the rat and avoided it. They had conditioned Albert to fear the rat. Pavlov famously carried out research on dogs. He would ring a bell when he presented his dogs with food. The dogs would salivate. Eventually the dogs would salivate when the bell was sounded - even if no food was presented. The dogs had been conditioned to salivate at the sound of a bell. The Humanist theory attempts to combine what is best from both theories, but in many ways is more similar to the earlier psychodynamic approach - and in other ways completely unique in its own right. All Three forces of psychology are relevant in explaining human behaviour and influencing further research. Sarah Nicholls 07/05/2007 pys 2 ...read more.