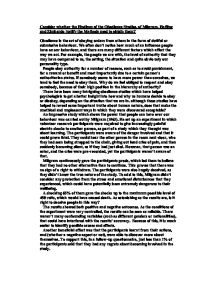 Findings of the Obedience Studies

Consider whether the Findings of the Obedience Studies, of Milgram, Hofling and Zimbardo justify the Methods used to obtain them? Obedience is the act of obeying orders from others in the form of dutiful or submissive behaviour. We often don't notice how much of an influence people have on our behaviour, and there are many different factors which affect the way we act. For example, the people we are with, the level of authority that they may have compared to us, the setting, the situation and quite obviously our personality type. People obey authority for a number of reasons, such as to avoid punishment, for a reward or benefit and most importantly due to a certain person's authoritarian status. If somebody seems to have more power than ourselves, we tend to feel the need to obey them. Why do we feel obliged to respect and obey somebody, because of their high position in the hierarchy of authority? There have been many intriguing obedience studies which have helped psychologists to get a better insight into how and why us humans decide to obey or disobey, depending on the situation that we are in. although these studies have helped to reveal some important truths about human nature, does that make the unethical and unpleasant ways in which they were discovered acceptable? ...read more.

This could lead people into believing that the experiment wasn't worthwhile, as the results weren't ecologically valid or representative of the population, yet it put the participants under intense pressure, which was capable of affecting their mental state. Another famous study which shows the power of social roles was performed by Hofling (1966). It was conducted in a real-life setting, a hospital, and the aim was to see if nurses would obey doctor's orders even if it meant going against the hospital's regulations. While on duty, the nurse would receive a phone call from an unknown doctor, about a particular patient. The nurse was then asked to give the patient a dose of a drug called astroten. First, they were asked to go to the cabinet and check it was there, this gave them the chance tee see the bottle was labelled 'maximum dosage 10mg'. the doctor the asked the nurse to give the patient a 20mg dosage. An overwhelming 21/22 nurses obeyed the instructions and had to be stopped before they prepared the medication. This experiment was very unethical due to the lack of informed consent. The nurses were completely unaware that they were participating in an experiment. To add to this, after having been explained to about the study, the nurses would have quite obviously felt a sense of both guilt and humiliation, which is unacceptable, due to the fact that they hadn't even accepted to taking part. ...read more.

The experiment clearly had a huge negative impact on the prisoners. the way in which they were treated created a large amount of suffering. The severe stress they experienced led to the majority of them needing counselling immediately, and some have most probably not fully recovered. Such a traumatic ordeal is sure to leave somebody scarred for life, which is unforgivable. In addition to this, the results themselves weren't very useful. Due to the artificial set-up the experiment lacked ecological validity, it was a role-play, not a real -life scene, and therefore cannot be applied to the real world. The sample was also unrepresentative; the participants were all white men, mostly students, who happened to read the article and all of a similar mental state. Because of this, we cannot generalise the results to all people. The experiment was also very uncontrolled. The experiment was mainly just being observed, so some of the data could be biased, depending on how the information was interpreted. I feel that none of the findings of these experiments justify the way in which they were carried out, as they are all unreliable or invalid in some way. The procedures that took place were all unethical; I feel Zimbardo's study being the worst. Although Hofling's may have been the least traumatic, informed consent is essential. I feel that all the methods used in these studies were unjustifiable, and that the results collected definitely do not make them acceptable. ...read more.

Overall, the writer has answered the question well Ã¢â‚¬â€œ they demonstrate a wide range of knowledge concerning whether the findings of particular psychological studies do indeed justify the methods used. It is very clear in terms of its structure, beginning ...

Overall, the writer has answered the question well Ã¢â‚¬â€œ they demonstrate a wide range of knowledge concerning whether the findings of particular psychological studies do indeed justify the methods used. It is very clear in terms of its structure, beginning with defining obedience and applying it to everyday life. It then proceeds to describe the studies, commenting on both its strengths and weaknesses systematically. I think this essay was well planned and considered, which leads to a good conclusion. However I feel this conclusion could be improved slightly, simply by expanding it Ã¢â‚¬â€œ it would be useful to refer to MilgramÃ¢â‚¬â„¢s study also, in a summative statement. This shows that a conclusion has been reached in regard to all three studies asked about in the question.

The writer is clearly aware of what terminology and issues the psychology essay requires, and uses them continually throughout. This shows that their analytical skills are very good, as they are able to evaluate the methods of the studies used in relation to a range of issues, for example reliability, validity and of course ethical considerations. The writerÃ¢â‚¬â„¢s evaluative points may be deemed stronger if they were to use more examples though. An example would be when they state, Ã¢â‚¬Å“Being put into such a serious situation would quite clearly cause a large amount of stressÃ¢â‚¬Â, they could mention that stress was identified when the participants exhibited signs of nervous laughter, or bit their fingernails. I think that this would just demonstrate more effectively that they know the studies inside out, and it provides definitive evidence for their evaluative statements.
A mistake that people frequently make is not continually referring to the specific question asked throughout the essay. It is obvious that the writer has the knowledge and understanding to answer the question, but to establish that this is the case more effectively to the examiner, the essay would be improved by explicitly writing, Ã¢â‚¬Å“therefore it does/does not justify the methods usedÃ¢â‚¬Â after criticising a study.

The quality of writing is of a fairly high standard, however there are a few grammatical mistakes present. In these two sentences, Ã¢â‚¬Å“First, they were asked to go to the cabinet and check it was there, this gave them the chance tee see the bottle was labelled Ã¢â‚¬Ëœmaximum dosage 10mgÃ¢â‚¬â„¢. the doctor the asked the nurse to give the patient a 20mg dosageÃ¢â‚¬Â, the capital letter at the start of the second sentence is missing, Ã¢â‚¬Å“teeÃ¢â‚¬Â needs to be altered to Ã¢â‚¬Å“toÃ¢â‚¬Â and Ã¢â‚¬Å“thisÃ¢â‚¬Â needs to be altered to Ã¢â‚¬Å“whichÃ¢â‚¬Â. But these are only minor details. Spelling and punctuation is of a high standard.