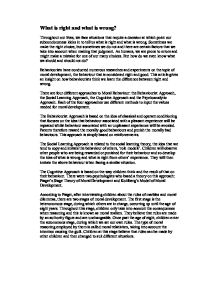 GCSE Psychology - What is right and what is wrong?

What is right and what is wrong? Throughout our lives, we face situations that require a decision at which point our subconciousness kicks in to tell us what is right and what is wrong. Sometimes we make the right choice, but sometimes we do not and there are certain factors that we take into account when making that judgment. As humans, we are prone to errors and might make a mistake for one of our many choices. But how do we even know what we should and should not do? Behaviourists have conducted numerous researches and experiments on the topic of moral development, the behaviour that is considered right and good. This article gives an insight on how behaviourists think we learn the difference between right and wrong. There are four different approaches to Moral Behaviour: the Behaviourist Approach, the Social Learning Approach, the Cognitive Approach and the Psychoanalytic Approach. ...read more.

According to Piaget, after interviewing children about the rules of marbles and moral dilemmas, there are two stages of moral development. The first stage is the heteronomous stage, during which others are in charge, occurring up until the age of eight years. Throughout this stage, children only take into account the consequences when reasoning and this is known as moral realism. They believe that rules are made by an authority figure and are unchangeable. Once past the age of eight, children enter the autonomous stage, during which we set our own rules. The type of moral reasoning employed by them is called moral relativism, taking into account the intention causing the guilt. Children at this stage believe that rules can be made by other children and then changed to suit different situations. Kohlberg constructed a more complex model than Piaget. There are three levels, each consisting two stages during moral development. ...read more.

This part of our mind checks whether the behaviour and thoughts of a person are morally good or right. If the act is immoral, the Superego will punish the person with feelings of guilt whereas if the person does a good thing, it will reward the person with feelings of pride or self-esteem. The Superego is developed during the phallic stage of Psychosexual Development when the Oedipus Complex needs to be resolved. During this stage, the child 'falls in love' with its opposite sex parent and therefore realise they are rivals with their same sex parent for the love of the opposite sex parent. To solve this complex, the child internalises the same-sex parent and this includes the parent's moral code, in hopes of winning over the opposite sex parent. The Superego is therefore of the internalised parent. The above are all the four approaches that behaviourists feel are responsible for the moral development in us. Each of them impacts us in different ways and lead to the way we make up our minds on what is right and what is wrong. ...read more.

This is a well-reasoned answer, as the candidate takes the time to approach a number of different perspectives of right and wrong in order to aid their answering of the quesiton. They display a very detailed knowledge of many theories ...

This is a well-reasoned answer, as the candidate takes the time to approach a number of different perspectives of right and wrong in order to aid their answering of the quesiton. They display a very detailed knowledge of many theories of development and the ages at which moral development has reached its peak; the only issue I can spot here is that the candidate neglects to explicitly concern the question throughout, and approaches the question as more of a display of knowledge about different morality development theories; the introduction is excellent but hence that, the candidate does not really concern the difference between right and wrong as well as they did in their introduction. I would recommend that candidates relate back to the question at every possible chance, to show the examiner they have an unbroken focus on the question. If this is too difficult, then at least refer back to it at the end of every paragraph/before moving on to the next point/theory. Without such relation to the question, the candidate is limited to a low B/high C grade.

Level of Analysis is not marked here - this is a task which tests AO1 (knowledge and understanding), so that will be marked here.

The candidate's knowledge of the theories of development and their main practitioners is extensive and detailed. There is a bias towards the Cognitive Moral Development theories, though this is understandable as there are two main theories presented and to include both, as well as evaluate the advantages of one over the other shows a good incentive to carry the work forward and provide an answer that is both interesting, insightful and balanced.

Elsewhere, the candidate has done well not to waste time discussing the entirety of Freud's theory of the development of the psyche (e.g. talking at length about the Id and the Ego) because with the theory being so complex, to talk about anything but the Superego (the only really necessary part of the psyche that pertains to morality) would mean they would not finish the answer sufficiently, so this awareness of time management is to be commended.

The Quality of Written Communication (QWC) here is excellent, The candidate's use of English is both proficient and accurate. The candidate applies, where appropriate, plenty of specialist vocabulary to show the examiner they know how to use psychological terminology to discuss the subject. Grammar, spelling and punctuation and consistently accurate throughout, lending to an essay that reads very well.