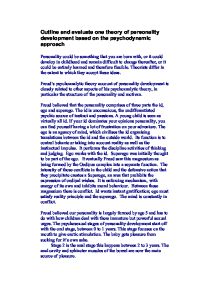 Outline and evaluate one theory of personality development based on the psychodynamic approach Personality could be something that you are born with, or it could develop in childhood and remain difficult to change thereafter, or it could be entirely learned and therefore flexible. Theorists differ in the extent to which they accept these ideas. Freud's psychoanalytic theory account of personality development is closely related to other aspects of his psychoanalytic theory, in particular the structure of the personality and motivan. Freud believed that the personality comprises of three parts the id, ego and superego. The id is unconscious, the undifferentiated psychic source of instinct and passions. A young child is seen as virtually all id. If your id dominates your epinions personality, you can find yourself having a lot of frustration on your adventure. The ego is an agency of mind, which civilises the id organising translations between the id and the outside world. Its function is to control behaviour taking into account reality as well as the instinctual impulse. It performs the discipline activities of thinking and judging. Ego works with the id. Superego was initially thought to be part of the ego. ...read more.

Unique individual experiences account for different personalities. At each stage the id seeks a zone of the body (an erogenous zone) from which it can gain feelings of pleasure. Our personalities are affected by how successful the id is at gaining enough pleasure at each stage. If there is too little or too much, fixation may result. This means that energy becomes tied up in the stage and unbalances the personality. Freud's theory has been very influential in our thinking and in inspiring other psychodyamic theorists. The theory acknowledges the importance of biological and environmental forces in shaping personality. The theory has stood the test of time and there is some evidence for the existence of the personality types predicted by Freud. For example Kline (1972) describes support for the anal personality type but there is little evidence that this is connected to the type of toilet training experienced in childhood. Freud showed us the child we had not known and showed us that things may not be what they seem and that one may have to go beyond the obvious unlike the behaviourists who blame everything on the environment. ...read more.

They are therefore difficult to test. For example a study by Yarrow (1973) linked short time periods spent feeding in infancy with later thumb sucking but these children may have had a stronger urge to suck all along leading them to feed quickly and thumb-suck. Freud believed every child should go through the Oedipus Complex he believed it was a universal phenomenon and other criticism is that it is cultural bias. For example the Malinowski's study of Trobriand islanders the boys were disciplined by their uncles instead of their dad. It was the uncle's role to guide the boy through childhood. However the father remained the mothers lover. Malinowski found was that a Trobiand Island boy his relationship with his father was very good, free of the love- hate ambivalence, which is central to Freud's Oedipus theory. It backs up the behavioural view as he has learned his feelings through his environment by comparison the relationship with the uncle was not usually so good. Segal (1990) suggests that more societies need to be examined including both western and avuncular. His theory has low ecological validity. Freud's theory is not widely accepted anymore. It is hard to give a precise definition of personality. As time changes personality changes over time or does it? ...read more.