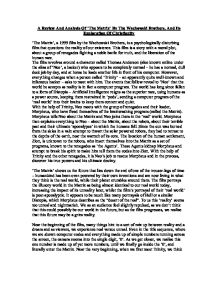 A Review And Analysis Of 'The Matrix' By The Wachowski Brothers, And Its Exploration Of Christianity.

A Review And Analysis Of 'The Matrix' By The Wachowski Brothers, And Its Exploration Of Christianity 'The Matrix', a 1999 film by the Wachowski Brothers, is a psychologically disturbing film that questions the reality of our existence. This film is a story with a moral plot, about a group of renegades fighting a noble battle for truth, and the liberation of the human race. The film revolves around a character called Thomas Anderson (also known online under the alias of 'Neo', a hacker) who appears to be completely normal - he has a normal, dull desk job by day, and at home he leads another life in front of his computer. However, everything changes when a person called 'Trinity' - an apparently quite well-known and infamous hacker - asks to meet with him. The events that follow reveal to 'Neo' that the world he accepts as reality is in fact a computer program. The world has long since fallen to a form of Distopia - Artificial Intelligence reigns as the superior race, using humans as a power source, keeping them restrained in 'pods', sending a computer program of the 'real world' into their brains to keep them content and quiet. ...read more.

Finally, his computer tells him to "follow the white rabbit", and as his buyer asks him if he wants to come out clubbing with him, he spots the tattoo on the arm of one of the women with him, which is none other than a white rabbit. This links to Lewis Carroll's story of 'Alice In Wonderland' where the young girl Alice follows a white rabbit, and she becomes trapped in a dream world - perhaps this is suggesting that what Neo accepts as reality is actually a dream world in which he is stuck? Throughout the film, the filmmakers toy with the audience, presenting ideas or real vs. unreal, dream vs. reality, whilst dropping many inter-textual connections and opposing ideas. In 'The Matrix' there are many connections and explorations in the idea of Christian beliefs. One of the main links is the character of Neo being portrayed as a Christ-like figure. Even his name suggests his Christ-like connections - his real name, Anderson, comes from the Greek word, Andros, meaning "man", therefore his full surname declares Neo as the "son of man". ...read more.

This is even further emphasized by "Yogacara", a Buddhist school formed in the fourth century. The school taught that the objective world we see as real is ultimately a product of our minds. 'The Matrix' resonates with this, and the school's founder, Vasubandhu, especially when Morpheus says "What is real? How do you define real?" All in all, I feel that 'The Matrix' was incredibly successful - it is entertaining, with a gripping plot and sensational special effects and stunts, whilst still carrying a moral, sub-textual message. Although the underlying Christian (and even Buddhist) connections were not instantly recognisable, if they had been too obvious I felt the subtext would not have been as effective. Instead of an obvious connection, the viewer has to put in an effort to discover a subtext via many cleverly placed signs and hints. The hidden meaning and deeper plot, including the message of the power of hope, love, and a belief in oneself, seems to come to life upon deeper reflection. The film raises many questions and presents new and original viewpoints on the definition of the reality of our existence, that involve the viewer and we find ourselves appreciating the film on many levels, both entertaining and moral. ...read more.