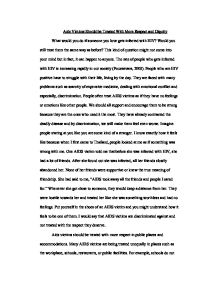 Aids Victims Should be Treated With More Respect and Dignity

Aids Victims Should be Treated With More Respect and Dignity What would you do if someone you love gets infected with HIV? Would you still treat them the same way as before? This kind of question might not come into your mind but in fact, it can happen to anyone. The rate of people who gets infected with HIV is increasing rapidly in our society (Pouezevara, 2003). People who are HIV positive have to struggle with their life, living by the day. They are faced with many problems such as scarcity of expensive medicine, dealing with emotional conflict and especially, discrimination. People often treat AIDS victims as if they have no feelings or emotions like other people. We should all support and encourage them to be strong because they are the ones who need it the most. They have already contracted the deadly disease and by discrimination, we will make them feel even worse. Imagine people staring at you like you are some kind of a stranger. I know exactly how it feels like because when I first came to Thailand, people looked at me as if something was wrong with me. One AIDS victim told me that before she was infected with HIV, she had a lot of friends. ...read more.

This is because they are not a threat to other people. People who have AIDS are not a risk to other since AIDS cannot be transmitted through casual contact. People are afraid of sharing objects with those who have AIDS. Would you dare to drink from the same glass of water with someone who has AIDS? Most people would definitely say "no" to this question. This is because most people believe that by sharing the same utensils or things as AIDS people, they are putting themselves at risk and would probably be infected with HIV. People do not want to share anything at all with those who have AIDS. From utensils such as plates, spoons, and cups to bathroom, most people would prefer it if these things were not used by AIDS people. People are very discriminating and it makes AIDS victims feel like an outsider. They feel that they cannot fit into the society, making their dignity even lower. They will not dare to use any public facilities or equipments since they know that they will be troubling others. Once an AIDS victim told me that she used to be a secretary of a school. ...read more.

Most importantly, do not hesitate to take to them because it is the best way to give them hope and strength to carry on with their life. Shaking hands cannot transmit AIDS, hugging, using the same bathroom, and such. In fact, AIDS cannot be transmitted by saliva. HIV is transmittable in limited ways. It is most often transmitted through unprotected sex or contact with infected blood and other body fluids (Cure Research, 2000). Apart from the mentioned, it is not easily transmitted through other methods. Although there are many people who are compassionate and supportive towards people with AIDS, most of the time they have to be faced with prejudice and rejection from their families, loved ones, and the society. The fact that today, people already treat victims of AIDS equally is wrong. In this day and age of information, people are fearful through ignorance and still treat AIDS victims unequally. We can still see people discriminate against them in many ways that I have mentioned earlier. How can we change people's attitudes towards AIDS victims? No laws can change people's discrimination toward AIDS victims. By educating people about AIDS, we might be able to reduce the level of fear, resulting in less discrimination. To figure out how to solve this problem, everyone needs to cooperate. We all have to take a special concern in this area. ...read more.