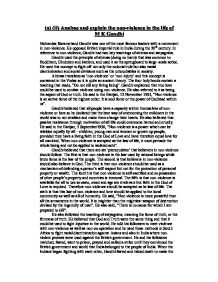 (a) (ii) Analyse and explain the non-violence in the life of M K Gandhi Mohandas Karamchand Gandhi was one of the most famous leaders with a movement in non-violence. He opposed British imperial rule in India during the 20th century. In reference to non-violence, Gandhi had two key teachings of ahimsa and satyagraha. Gandhi used the principle of ahimsa (doing no harm) that was common to Buddhism, Hinduism and Jainism, and used it as the springboard to large-scale action. He used this concept to fight off not only the colonial rule but also racial discrimination and social divisions such as the untouchables in society. Ahimsa translates as 'non-violence' or 'non-injury' and this concept is contained in the Vedas so it is quite an ancient theory. The four holy books contain a teaching that reads, "Do not kill any living being". Gandhi explained that true love could be used to combat violence using non-violence. He also referred to it as being the aspect of God or truth. ...read more.

The sixth is that this law of non-violence and love should be applied to the local community as well as all of humanity. He said, "Non-violence is more powerful than all the armaments in the world. It is mightier than the mightiest weapon of destruction devised by the ingenuity of man". He also said, "There is no cause for which I am prepared to kill". He also followed the teaching of satyagraha, meaning the force of truth, or the firmness of truth. He believed that God and Truth were the same thing and that it could be used to fight injustice in the world. He told his followers to meet violence with non-violence as well as non-co-operation and he used these methods in South Africa to fight racial discrimination against Asians and also in India where non-violent protests were used against the British government. He and his followers marched, fasted, went to prison, prayed and called a strike until they convinced the British government and world that India belonged to the people of India. ...read more.

The ninth is that if an official is being assaulted, the civil resister will protect the official from the insult or attack, even if that means risking his own life. He said, "Non-violence is not passivity in any shape or form. It is the most active force in the world". Gandhi used these two key teachings in practice with the miners' strikes, the massacre of Amritsar, the salt march and in hampering the British economically by rejecting Western cloth. In all of these demonstrations he used the teachings of ahimsa (non-violence) and satyagraha (for non-violent protest), which had a profound effect on the people around him. He said, "In non-violence the masses have a weapon which enables a child, woman or even a decrepit old man to resist the mightiest government successfully". So Mahatma Gandhi used the beliefs in Hinduism of ahimsa and satyagraha mainly to end the colonial rule by the British in India through means of non-violence. One of his most famous sayings goes "An eye for an eye makes the whole world blind" and it sums up his key teaching of non-violence. ...read more.