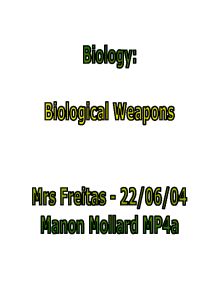 To that, the countries that are against biological weapons answer that it is unrealistic to say large populations will wear those types of clothes for a long period of time, above all when the weather is warm, and this is a big problem because large populations cannot be protected against a biological attack; indeed we cannot know when it is going to happen so we can't be adequately prepared against it, and even if we identify the pathogen, we still need to be able to cure it; more than that, it is very expensive to build a national civil defence system against biological and chemical weapons, it has been estimated to $ 80 billion. When scientists do research about the pathogens, it can be very positive in one way because it can lead to the developments of cures or vaccines. But on the other side, there is the negative aspect, because all the new information can also be used to produce more and more efficient biological agents and weapons. ...read more.

But prevention stays the most effective safeguard against biological warfare and terrorism. I think that it is primordial to be able to control the commands of pathogens, because I read in the article "The Specter of Biological Weapons" that "no more than a credit card and a false letterhead" to get the pathogen, in that case the plague bacteria. Personally, I think that biological weapons are very bad and wrong because I simply do not see the point of it. I really do not understand why people would want to kill entire innocent populations. Of course I think that research on pathogens needs to be done to improve medical cares and find more vaccines, to eradicate more diseases, but the fact that some people use this medical research to create biological weapons is horrible. The problem of biological weapons has always been present but it is now becoming more and more important because of the progress of biotechnology, and because it has been proved that terrorists were not afraid to use this kind of weapons anymore. So I think that the international agreements against biological warfare have a very important role to play. ...read more.