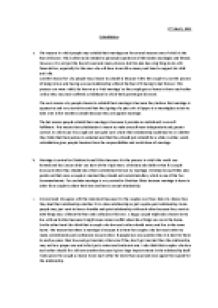 Cohabiting versus Marriage - the Christian view.

﻿9th March, 2011 Cohabitation 1. The reasons in which people may cohabit their marriage are for several reasons one of which is the fear of divorce. This is often to be related to personal experience of the broken marriages and friends. However, it is not just the fear of a sad and messy divorce but this also has a big thing to do with financial ties, especially for the man who will have to sacrifice money and time to support his child and wife. Another reason for why people may choose to cohabit is because it lets the couple try out the process of being in love and having a sexual relationship without the fear of it having to last forever. ...read more.

In other words cohabitation gives people freedom from the responsibilities and restrictions of marriage. 1. Marriage is central to Christian Sexual Ethics because it is the process in which the world was formed and how Jesus Christ was born of the Virgin Mary. Christians also believe that if a couple love each other they should show their commitment to love by marriage. Christian Sexual Ethics also points out that once a couple is married they should not commit adultery which is one of the Ten Commandments. To conclude marriage is very central to Christian Ethics because marriage is done in order for a couple to share their love and have a sexual relationship. ...read more.

If people love one another then it is best for them to really express their love and get married, otherwise if they don?t get married then the relationship may not be a proper one and in fact just a minor and irrelevant one. I also think that couples who love each other should live with one another because it gives huge improvements in the relationship itself. It also gives the couple a chance to see each other far more than usual and once again this is good for the relationship. To conclude I believe that couples should be given the freedom of choice as to whether they get married and live with each other because different people like to take things at different speeds to others. ...read more.