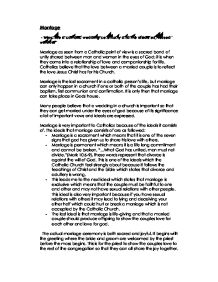 Describe a catholic wedding ceremony and the ideals expressed within it.

Marriage - Describe a catholic wedding ceremony and the ideals expressed within it. Marriage as seen from a Catholic point of view is a sacred bond of unity shared between man and women in the eyes of God; it is when they come into a relationship of love and companionship for life. Catholics believe that the love between a married couple is to reflect the love Jesus Christ has for his Church. Marriage is the last sacrament in a catholic person's life, but marriage can only happen in a church if one or both of the couple has had their baptism, first communion and confirmation. It is only then that marriage can take place in Gods house. Many people believe that a wedding in a church is important so that they can get married under the eyes of god because of its significance a lot of important vows and ideals are expressed. Marriage is very important to Catholics because of the ideals it consists of. The ideals that marriage consists of are as followed: - Marriage is a sacrament which means that it is one of the seven signs that god has given us to share his love with others. - Marriage is permanent which means it is a life long commitment and cannot be broken, "...What God has united, man must not divide."(Mark 10:6-9), these words represent that divorce is against the will of God. This is one of the ideals which the Catholic Church feel strongly about because it follows the teachings of Christ and the bible which states that divorce and adultery is wrong. - This leads me to the next ideal which states that marriage is exclusive which means that the couple must be faithful to one and other and may not have sexual relations with other people. This ideal is also very important because if you have sexual relations with others it may lead to lying and deceiving your other half which could hurt or break a marriage which is not accepted by the Catholic Church. ...read more.

I think if a catholic family was faced with such a problem that it would cause a lot of arguments for example if the woman wanted to keep the baby but the man did not this would bring about a lot of arguments which could lead to separation which is not aloud in the Catholic Church. A different problem that a family could face is disagreements within the household; whether it is between parents and children or husband and wife. These disagreements could be anything from minor disagreements to major disagreements. However no matter how little the problem is it could escalate to a even bigger problem if they are not talked about; because if the family do not communicate with one another then everything will just be tense and make the problem become worse. If the problem becomes worse it could lead to a number of things such as separation, arguments over children, abuse, domestic violence or even lead them to depression, alcoholism or drug use. These problems are all very serious and could take effort from everyone in the household to overcome them. The Catholic Church believes that by allowing these problems to grow you are breaking the ideals of marriage so the Catholic Church recommends talking about and overcoming such problems. There are many other problems in families today which are also equally important such as, time issues, sexual problems, illness, falling out of love, not wanting or being unable to have children, financial problems and religious differences. These problems are usually associated with the permanent and life giving ideals of a catholic marriage. Issues like these can be more difficult for some couples to resolve than others. For example if a couple do not want children they could use a form of contraception to stop them having a baby. However a catholic couple could not do this because forms of contraception are not supported in the Catholic Church. ...read more.

This mother would still not be entitled to an abortion. However these points could be argued and many could state that by allowing abortion in one case could lead to another and another. The Catholic Church bans artificial family planning methods. This is sometimes seen as a negative teaching from the Catholic Church because if a couple wants children and are finding it difficult to conceive they are not allowed to use artificial methods of conceiving such as IVF treatment because it is against catholic teachings. This is negative in some circumstances but when looked at in depth it is obvious that the reason for this teaching is that if the Catholic Church allows IVF it may lead to further treatments like genetic engineering which is unseen of in the Catholic Church. The Catholic Church also forbids artificial forms of contraception and sex before marriage because God told us to be fruitful and multiply but to do so where the child will be brought up into a loving family. I believe that this is probably the most argued point between Catholics today. This is because sex before marriage is very hard to avoid in today's society and if it is happening, the ban on contraception doesn't help at all. I agree that this point is negative and old fashion because with the developments of contraception, sex is now safer and easier to have without having to worry about risks of STI's and unwanted pregnancies. Finally I believe that all of these teachings both have negative and positive sides to the argument. Some catholic teachings such as the one on parent's duties towards their children do have a positive contribution to societies understanding of the family. However some teachings like the ones on artificial contraception and family planning methods are out of date and need to be adapted and improved to help young Catholics in today's society so they can feel free to stick to the catholic religion without disobeying some teachings. ?? ?? ?? ?? ...read more.