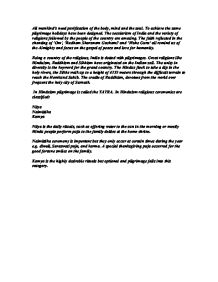 Describe a visit to a Hindu place of pilgrimage, explaining its importance to believers.

All mankind's need purification of the body, mind and the soul. To achieve the same pilgrimage holidays have been designed. The secularism of India and the variety of religions followed by the people of the country are amazing. The faith reflected in the chanting of 'Om', 'Budham Sharanam Gachami' and 'Wahe Guru' all remind us of the Almighty and focus on the gospel of peace and love for humanity. Being a country of the religious, India is dotted with pilgrimages. Great religions like Hinduism, Buddhism and Sikhism have originated on the Indian soil. The unity in diversity is the keyword for the grand country. The Hindus flock to take a dip in the holy rivers, the Sikhs walk up to a height of 4329 meters through the difficult terrain to reach the Hemkund Sahib. The cradle of Buddhism, devotees from the world over frequent the holy city of Sarnath. In Hinduism pilgrimage is called the YATRA. In Hinduism religious ceremonies are classified: Nitya Naimittika Kamya Nitya is the daily rituals, such as offering water to the sun in the morning or mostly Hindu people perform puja to the family deities at the home shrine. Naimittika ceremony is important but they only occur at certain times during the year e.g. diwali, Saraswati puja, and karma. A special thanksgiving puja occurred for the good fortune smiles on the family. Kamya is the highly desirable rituals but optional and pilgrimage falls into this category. THE GANGES Consistent with Hindu's mythology, the river Ganges is a goddess, Ganga was the mistress of all the gods until a human king, Bhagiratha, was permitted to bring Ganga to earth as a river to free the souls of the sons of King Sagara from their ashes. This story lies behind the Hindu belief that the waters of the Ganges wash away the sins. If the ashes of the death person are thrown in the river it is believed that the soul of the person goes straight to the heaven. ...read more.

It is a hope of all Hindus that in their lifetime they should bathe at least once in the holy Ganges. The river Ganges is considered so holy and purifying that since time immemorial many poets have written hundreds of verses in its praise, and of the well-known one says: 'He who (with reverence and devotion) utters (the holy name of) Ganges, even from a distance of hundreds of miles (away from it), gets absolved from all his sins and proceeds straight to the abode of Vishnu. O, Mother Ganges, I bow down to you, because by a meter touch of your (holy) waters, even snakes, horses, deer and monkeys (not to mention men) become as pure, as beautiful and as adorned as Shiva and can then wander about (fearlessly). (Gangashtaka Kalidasa, v.8). As bunch of people were bathing in the Ganges a women was hitting man with a big stick because every year at least 100's of pilgrims drown in the drown. I saw mostly old people with very wrinkled skin. They were singing pajans in a small group. For most Hindu Ganges is like an end of life, so mostly old people go to the pilgrimage. On the ghats people had their head shaved. The men were left with their chotis, the small tofts on the backs of their skulls. The women from the south had their head shaved completely. It is believed that shaving their heads their bad karma are removed from them and begin a free form sin. I looked east to my side I saw a man who was standing with one leg up and one leg on the floor. He was wearing bright orange clothing representing the sun. He had his thumb on his left side of his nose and two fingers right side of his nose. He had his left hand on his ear. He was doing meditation. ...read more.

Kabir gives utterance to the words of experience: and he Knows very well that all other things Are untrue. If God be within the mosque, then to whom does the world belong? If Ram be within the image which you find upon your pilgrimage, Then who is there to know what happens without?' (From 'One hundred poems of Kabir' translated by Rabindranath Tagore) Hindus consider that the water of the Ganges is holy and that they will get pity of their sins and Moksha if they bathe in it and drink it. It is believed in end of our life we aren't going to take anything with us, we are going to be in the heaven or the hell. That's our last stage to go to the heaven we need to be pure by heart. So people who have done bad things they can go to the pilgrimage and feel sorry for what they have been doing. This gives them a peace of mind. Even people change when they go to the pilgrimage people who do bad stuff they change to a good human. Hindus believe that there is remuneration such as getting curing of diseases so many people go there for this reason. Dead people's ashes are deposited so the person will be promoting to the Moksha. The relatives do this when one of the relatives goes to the pilgrimage the other relatives will say they will come as well. In my own opinion it's a waste of time, of going to the pilgrimage, I'll rather spend the time with family or studies. But people who have been disturbed they could go to the pilgrimage and relax and have fresh mind. Describe a visit to a Hindu place of pilgrimage, explaining its importance to believers. Why do Hindus go on pilgrimage? What effects may a pilgrimage have on their lives. There are more important things for Hindus to do than go on a pilgrimage. Do you agree? Give reason to support your answer and show that you have thought about different points of view. ...read more.