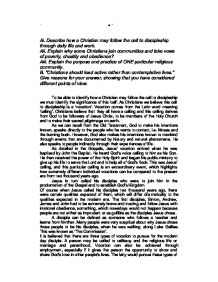 Describe how a Christian may follow the call to discipleship through daily life and work.

Daniel Cognolato 3rd May 2003 Y10 R.E. Vocation Coursework Ai. Describe how a Christian may follow the call to discipleship through daily life and work. Aii. Explain why some Christians join communities and take vows of poverty, chastity and obedience? Aiii. Explain the purpose and practice of ONE particular religious community. B. "Christians should lead active rather than contemplative lives." Give reasons for your answer, showing that you have considered different points of view. To be able to identify how a Christian may follow the call to discipleship we must identify the significance of this 'call'. As Christians we believe this call to discipleship is a 'vocation'. Vocation comes from the Latin word meaning 'calling'. Christians believe that they all have a calling and this calling derives from God to be followers of Jesus Christ, to be members of the Holy Church and to make their sacred pilgrimage on earth. As we can recall from the Old Testament, God to make his intentions known, speaks directly to the people who he wants to contact, i.e. Moses and the burning bush. However, God also makes his intentions known to mankind through events that are documented by history and natural phenomena. He also speaks to people indirectly through their experiences of life. As detailed in the Gospels, Jesus' vocation arrived when he was baptised by John the Baptist. He heard God's voice calling to him as his Son. He then received the power of the Holy Spirit and began his public ministry to give up his life to serve the Lord and to help all of God's flock. This was Jesus' calling, and this particular calling is an extraordinary event, which highlights how extremely different individual vocations can be compared to the present era from two thousand years ago. Jesus in turn called his disciples who were to join him in the proclamation of the Gospel and to establish God's Kingdom. ...read more.

It is a mix between an active and contemplative community. The founder of Taiz� was Brother Roger. During long terms fighting illness he received a call to create a community where simplicity and kind-heartedness would dominate proceedings and where a life of these qualities could be essential Gospel realities. He chose to settle in this small Burgundy village so that he could help war refugees evade capture, many of whom were Jewish. Thanks to a small loan Brother Roger set up this refuge for all those who sought it and in 1940 formed the Taiz� community, which has endured ever since. Brother Roger dreamed of being able to help people in every spiritual and physical way possible and he welcomed everybody who wished to join him. Brother Roger led a life of minimalism and prayer, largely thanks to the fact that the buildings where the refuge was constructed contained hardly any amenities associated with ordinary lifestyle. Today the community must live off its own farm and it has to sell its own products made by the residents to survive, as it does not rely on any other sources for funding. Later on in 1949, the first brothers committed themselves for their whole life to celibacy, to material and spiritual sharing and to great simplicity of life. Today, the Taiz� community is made up of over a hundred brothers, coming from twenty-five different nations and various Protestant and Catholic backgrounds. The sole existence of the community integrates the sign of reconciliation between divided Christians and separated peoples. The Brothers who now live there do not accept material possessions or donations for their own personal inheritances, they are directly given by the community to the poor. Already in the 1950s, brothers went to live in disadvantaged places to be with people who were suffering from poverty or divisions. Today, small groups of brothers are present in Asia, Africa and South America. ...read more.

This is why becoming close to God is essential for all Christians and this can be obtained if completely dedicated to God. It helps to understand a person's purpose in life. The issue that prayer is work can also be sustained by spiritual figures such as St. Benedict. He said that a life of prayer is essential for redemption of our sins. We must pray to God alone, away from others and not with long structured prayers but with truthfully spoken words that God will definitely hear and therefore acknowledge our words as true. (Sermon on the Mount) Even Jesus often took time out to pray to the Lord when in times of need or doubt and wished to be alone. This outlined his need to be in contact with God as displayed before he was to die, when he prayed in the Garden of Gethsemane. We may take example from when Jesus visited Martha. She complained that her sister Mary did not help her in her housework and all she did was to listen to the teachings of the Lord. Jesus said that Mary's example was better than Martha's and this emphasises the point of contemplative status rather than active status. Let us not forget that contemplative orders can also do important Christian work such as offering intercessions, retreats, counselling and manufacturing goods, which displays how they can also be involved in active work. Finally it is also true how an active life can lead to becoming enveloped by material possessions and abuses of the body, which can mislead a person away from the good cause. These temptations can be avoided when secluded away from the outside world, as they matter little when dedicated to God. In conclusion I am inclined to say that an active life is the better way of life. I judge this mainly on Jesus' actions throughout his life, but a balance must be obtained between the two types of life and if this can be achieved then we can all aim to be better Christians. ...read more.