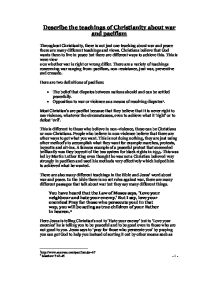 Describe the teachings of Christianity about war and pacifism

Describe the teachings of Christianity about war and pacifism Throughout Christianity, there is not just one teaching about war and peace there are many different teachings and views. Christians believe that God wants them to live in peace but there are different ways to achieve this. This is were view s on whether war is right or wrong differ. There are a variety of teachings concerning war ranging from: pacifism, non-resistance, just war, preventive and crusade. Here are two definitions of pacifism: * The belief that disputes between nations should and can be settled peacefully. * Opposition to war or violence as a means of resolving disputes1. Most Christian's are pacifist because that they believe that it is never right to use violence, whatever the circumstances, even to achieve what it 'right' or to defeat 'evil'. This is different to those who believe in non-violence, these can be Christians or non-Christians. People who believe in non-violence believe that there are other ways to get what you want. This is not doing nothing, they are just using other method's to accomplish what they want for example marches, protests, boycotts and sit-ins. A famous example of a peaceful protest that succeeded brilliantly was they boycott of the bus system for black rights in 1955. ...read more.

The middle ages were the first recorded history of Christian fighting or violence. The Christians fighting in these wars believe that God was on their side and that they were fighting evil. They believed that they were fighting for the right thing by trying to re-capture the 'Holy Land'. These were considered 'Holy Wars'. In the thirteenth century St. Augustine first decided to introduce some rules to see whether it would be 'right' for Christians to go to war or not. This set of rules has become known as 'Just War'. The rules that have to be met for a war to be just were: * War should be declared by a proper authority such as a government or a king, and not just by any ordinary group of people. * There must be a good reason for starting a war, not simply greed. * The reason for going to war must be a desire to do good. * War must be a last resort when everything else has been tried first. * The good that is likely to come out of the war must amount to more than the harm that will be done. * It must be possible to win. Wars should not be fought against an opponent that is obviously more likely to succeed. ...read more.

It doesn't then make sense for a Christian to go off to war and start killing all 'God's people'. Christian's believe God has given you life he is the only one who has the power to take you're life away from you. 'There is a time for everything a time to be born and a time to die'9. Most Christians believe God decides when your life begins and when it ends. Thus it is shown as it is one of the Ten Commandments 'Thou shall not kill'. It is forbidden to take away a life that God has created. It is not acceptable to kill someone or even something else. Also taking you're own life is not consider acceptable as it is taking a life when only God should have the power to do so. In war this is exactly what you are doing you are taking other people's lives. In conclusion there are many different views on war and pacifism none of them are definitely right or wrong it just depends on what each individual Christian's beliefs are on the subject and what they personally have been taught but most Christians believe that violence and war are wrong. 1http://www.answers.com/pacifism&r=67 2 Matthew 5:43-45 - 1 - 3Matthew 5:9 4 Matthew 26:52 5 Mark 11:15 6 Joel 3:9 7 Eccles 3:1, 3:8 - 2 - 8 Genesis 1:27 9 Eccles 3:1,3:2 - 4 - ?? ?? ?? ?? ...read more.