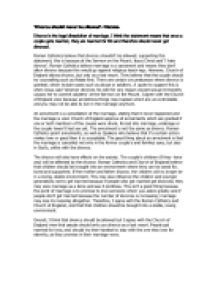 Divorce should never be allowed. Discuss.

'Divorce should never be allowed'. Discuss. Divorce is the legal dissolution of marriage. I think the statement means that once a couple gets married, they are married for life and therefore should never get divorced. Roman Catholics believe that divorce shouldn't be allowed; supporting this statement, this is because at the Sermon on the Mount; Jesus Christ said 'I hate divorce'. Roman Catholics believe marriage is a sacrament and means they don't allow divorce because this would go against religious teachings. However, Church of England allows divorce, but only as a last resort. They believe that the couple should try counselling such as Relate first. ...read more.

An annulment is a cancellation of the marriage, stating that it never happened and the marriage is void. Church of England approve of annulments which are granted if one or both members of the couple were drunk, forced into marriage, underage or the couple haven't had sex yet. The annulment is not the same as divorce. Roman Catholics grant annulments, as well as Quakers who believe that if a certain action makes love or good then it is acceptable. The good thing about an annulment is that the marriage is cancelled not only in the former couple's and families eyes, but also in God's, unlike with the divorce. ...read more.

This isn't a good thing because the point of marriage is to promise to love someone whom you adore greatly and if people don't get married because the number of divorces is increasing; marriage may lose its meaning altogether. Therefore, I agree with the Roman Catholics and Church of England, and that that children should be brought into a stable, loving environment. Overall, I think that divorce should be allowed but I agree with the Church of England view that people should only use divorce as a last resort. People get married for love, and should try their hardest to stay with the one they love for eternity; as they promise in their marriage vows. ...read more.