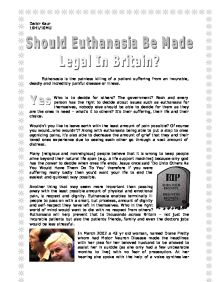 Euthanasia is the painless killing of a patient suffering from an incurable, deadly and incredibly painful disease or illness.

Who is to decide for others? The government? Each and every person has the right to decide about issues such as euthanasia for themselves, nobody else should be able to decide for them as they are the ones in need - what's it to others? It's their suffering, their life and their choice.

Wouldn't you like to leave earth with the least amount of pain possible? Of course you would...who wouldn't? Along with euthanasia being able to put a stop to ones agonizing pains, it's also able to decrease the amount of grief that they and their loved ones experience due to seeing each other go through a vast amount of distress.

Many (religious and nonreligious) people believe that it is wrong to keep people alive beyond their natural life span (e.g. a life support machine) because only god has the power to decide when ones life ends. Jesus once said 'Do Unto Others As You Would Have Them Do To You' therefore if you were suffering really badly then you'd want your life to end the easiest and quickest way possible.

Another thing that may seem more important than passing away with the least possible amount of physical and emotional pain, is respect and dignity. Euthanasia enables terminally ill people to pass on with a small, but priceless, amount of dignity and self-respect they have left in themselves. Who in the right world of mind would want to die with no respect from others? Euthanasia will help prevent that to thousands across Britain - not just the incurable patients but also the patients friends, family and even the doctors jobs would be less stressful.

In March 2002 a 43 yr old woman, named Diane Pretty whom had Motor Neuron Disease made the headlines with her plea for her beloved husband to be allowed to assist her in suicide (as she only had a few unbearable months to live) with no fear of prosecution. At her hearing she spoke with the help of a voice synthesizer and said 'I want my rights to have a death with dignity', but her plea was rejected and she died later that year in May, in a hospice.

What are people who want euthanasia like? Selfish? They'll make their decision while thinking about nobody but themselves. They don't even think about how their family and friends will take the news and how much they'll miss them. If the person wanting euthanasia loved them dearly then they'd live on for them.

Religious people have a point of view for euthanasia but they also have views against euthanasia to. Christians have hospices around Britain, which are specially for looking after terminally ill people while making sure that they don't lose their dignity, Christianity believes euthanasia is wrong as they believe in the 'Sanctity Of Life' and it is against the commandment 'Do Not Kill'. Jesus suffered severely and painfully on the cross, but he did not cut short his suffering - therefore it is not down to us to end out life. Other religions, including Christianity believe that accepting suffering may have a spiritual value for your soul, in heaven, rebirth or the afterlife.

Terminally ill people include people whom are in comas and unconsciousness; so the persons loved ones may commit euthanasia against their wishes and the patient might recover from an illness against all odds as the doctor's diagnosis has a chance of being wrong. Doctors' jobs are to save peoples lives - well to at least try, not to kill them; this will result in Britain's doctors being murderers and no one would like to go to a murderer for help.