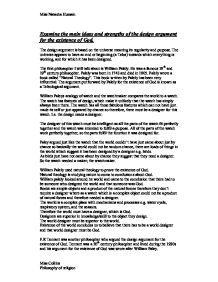 Examine the main ideas and strengths of the design argument for the existence of God.

Examine the main ideas and strengths of the design argument for the existence of God.

The design argument is based on the universe meaning its regularity and purpose. The universe appears to have an end or beginning (a Telos) towards which everything is working, and for which it has been designed.

The first philosopher I will talk about is William Palely. He was a famous 18th and 19th century philosopher. Palely was born in 1743 and died in 1805. Palely wrote a book called “Natural Theology”. This book written by Palely has been very influential. The argument put forward by Palely for the existence of God is known as a Teleological argument.

William Paleys analogy of watch and the watchmaker compares the world to a watch.

The watch has features of design, which make it unlikely that the watch has simply always been there. The watch has all these fabulous features which can not have just made its self or just appeared by chance so therefore, there must be a designer for this watch. I.e. the design needs a designer.

Paley argued just like the watch that the world couldn’t have just came about just by chance so basically the world could not be random chance, there are loads of things in the world which suggest it has been designed by a designer e.g. birds.

As birds just have not came about by chance they suggest that they need a designer.

So the watch needed a maker; the watchmaker.

Natural theology is studying nature to come to conclusions about God.

William palely looked around he world and came to the conclusion that there had to be someone who designed the world and that someone was God.

The world is a complex place with mechanisms and processes e.g. water cycle, respiratory system, and the seasons.

Therefore the world must have a designer, which is God.

Designers are superior in knowledge/skill to the object they design.

The world designer must be superior to the world.

Tennants argument takes into account the ideas put forward by other philosophers such as the theory of evolution (Charles Darwin) and also the Big Bang Theory.

Tennant uses probability in his argument; he said that the universe came into existence in another manner, not by chance. He also said there is an extraordinary list of physical conditions which have to be in place for every human life to be possible. He said that is it impossible to create life?

You could have all the primary conditions necessary for such life such as sunlight, oxygen, yet life cannot be possible, there is another factor that is required and that is likely to be God.

Tennant also said that the universe is not chaotic but instead he said that the universe had order, regularity, beauty, life and self-conscious beings. He also said that even if we accept life has evolved, there is still the problem of where that life has come from. Tennant used the evolution theory of Charles Darwin in his argument. He said, “The survival of the fittest presupposes the arrival of the fit”.

Tenant believed that the world is the way it is and that we are they way we are because of Gods guiding intelligence behind his creation e.g. Big Bang. It is this that leads him to the conclusion that there is no coincidence that everything on earth is just right for human existence: God intended it to be that way.

The world processes are not that complex and the world does not resemble a obviously designed object like a watch.

The designer may have died or just abonded his creation.