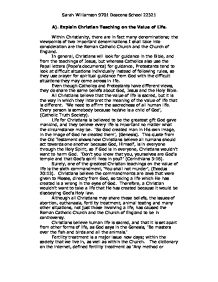 A). Explain Christian Teaching on the Value of Life. Within Christianity, there are in fact many denominations; the viewpoints of two important denominations I shall take into consideration are the Roman Catholic Church and the Church of England. In general, Christians will look for guidance in the Bible, and from the teachings of Jesus, but whereas Catholics also use the Papal letters (Pope's documents) for guidance, Protestants tend to look at difficult situations individually instead of following rules, so they use prayer for spiritual guidance from God with the difficult situations they may come across in life. Even though Catholics and Protestants have different views, they do share the same beliefs about God, Jesus and the Holy Bible. All Christians believe that the value of life is sacred, but it is the way in which they interpret the meaning of the value of life that is different. 'We need to affirm the sacredness of all human life. Every person is somebody because he/she is a child of God', (Catholic Truth Society). Life for Christians is believed to be the greatest gift God gave mankind, and they believe every life is important no matter what the circumstance may be. 'So God created man in His own image, in the image of God he created them', (Genesis). ...read more.

'Be fruitful and increase in number...Fill the earth', (Genesis 1:28). In 1990, the Pope stated, 'Life is God's gift, and we do not have the right to children.' Catholics firmly believe that just because science makes something possible it doesn't mean that it is right, but Protestants believe it is okay for science to assist childless couples to conceive. Pope Pius XII said, 'Using a donor is mechanical adultery. Donating sperm to create a child, yet having no responsibility for that child isolates the sacred act of creating life from the marriage union, and is a violation of the marriage union.' The seventh commandment is, 'Thou shall not commit adultery, (Exodus 20:14). However, the Church of England believes that using donations of sperm and eggs are an acceptable way to help a couple fulfil their desire to have a child, but they believe that if a child is conceived in this manner, the child should have access to the information concerning the donor. In Britain, any extra embryo's can legally be used in experiments until they are fourteen days old-at this time they must be destroyed. Catholics believe that life begins at conception; when an egg and sperm meet, a life is created that is independent of the mother and father. ...read more.

After Cain had murdered his brother Abel, God punished him, not by death, but by banishing him from the land whereby Cain became a wonderer. Although, God, also went ahead to 'put a mark on him to prevent him from being killed by anyone who would meet him', (Genesis 4:1-16). By His own example, God denounces justice based on vengeance and violence. Pope John Paul II once said, 'The death penalty perpetuates the very evil it is trying to terminate. The practice and promotion of the death penalty is a reflection of the 'culture and death' of our times. The act of killing a person is intrinsically an evil, whether lawfully or unlawfully, by murder or by the state, it is just the reasons that make it appear different. We cannot teach that killing is wrong by killing.' A Bishop called David B Thomson said, 'Capital punishment feeds the cycle of violence in society by pandering to a lust for revenge. It brutalizes us and deadens our sensitivities to the precious nature of every single human life.' All Christians would agree that life imprisonment would make more sense, that the death penalty, because the culprit could repent, and it says in Luke 18:14, 'Everyone who exalts himself will be humbled, and he who humbles himself will be exalted.' ?? ?? ?? ?? Sarah Williamson 9701 Deacons School 22321 ...read more.