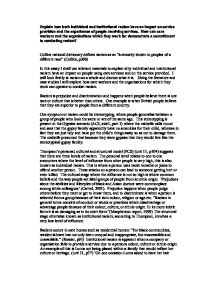 Explain how both individual and institutional racism have an impact on service provision and the experiences of people receiving services. How can care workers and the organisations which they work for demonstrate a commitment to combating racism?

Explain how both individual and institutional racism have an impact on service provision and the experiences of people receiving services. How can care workers and the organisations which they work for demonstrate a commitment to combating racism? Collins national dictionary defines racism as an "animosity shown to peoples of a different race" (Collins, p396) In this essay I shall use relevant materials to explain why individual and institutional racism have an impact on people using care services and on the service provided. I will look firstly at racism as a whole and discuss what it is. Using the literature and case studies I will explore how care workers and the organisations for which they work can operate to combat racism. Racism is prejudice and discrimination and happens when people believe there is one race or culture that is better than others. One example is when British people believe that they are superior to people from a different country. One symptom or racism could be stereotyping, where people generalise between a group of people who look the same or are of the same age. This stereotyping is present in the Gypsies scenario (AC3, side1, part 1) where the midwife calls round and sees that the gypsy family apparently have no amenities for their child, whereas in fact they are just tidy and have put the child's things away so as not to damage them. ...read more.

Playing truant at school can be another way of for children to deal with racial attacks, perhaps the person being attacked would try to avoid certain situations. When discrimination is persistent and widespread in the way in which it affects a particular group of people, more general and social exclusion can result. Persistent and widespread discrimination happens when power relationships are built up over a long period of time or beliefs are based upon prejudice, enter the "culture" of the groups who discriminate and who are discriminated against. Sometimes it helps the oppressor to feel good: may be the tormentor dislikes him/herself and therefore feels the need to attack other people in order to feel better. Racism can have an impact on service providers. Services such as Police, NHS organisations and local councils can be seen as being racist if for example an Asian couple are refused a service and the company or service look favourable towards British people. Narinder Kaur writes "I was immediately put into the bottom set at school"(channel4.com) she had to prove to her tutors that allthough her skin was a different colour she was still intellectual and was as intelligent as the other children. This is an example of institutional racism. The teachers presumed that Narinder was not as bright as the other children in her class due to her ethnic origin. ...read more.