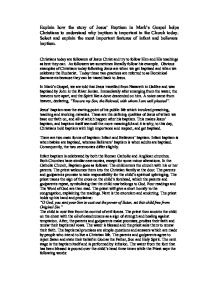 Explain how the story of Jesus' Baptism in Mark's Gospel helps Christians to understand why baptism is important in the Church today. Select and explain the most important features of infant and believers baptism.

Explain how the story of Jesus' Baptism in Mark's Gospel helps Christians to understand why baptism is important in the Church today. Select and explain the most important features of infant and believers baptism. Christians today are followers of Jesus Christ and try to follow Him and His teachings as best they can. As followers we sometimes literally follow his example. Obvious examples of Christians today following Jesus are when we get baptised and when we celebrate the Eucharist. Today these two practices are referred to as Dominical Sacraments because they can be traced back to Jesus. In Mark's Gospel, we are told that Jesus travelled from Nazareth in Galilee and was baptised by John in the River Jordan. Immediately after emerging from the water, the heavens tore apart, and the Spirit like a dove descended on him. A voice came from heaven, declaring, "You are my Son, the Beloved, with whom I am well pleased". Jesus' baptism was the starting point of his public life which involved preaching, teaching and working miracles. ...read more.

The parents and godparents agree to reject Satan and state their belief in God as the Father, Son and Holy Spirit. The next stage is the baptism itself and is performed by infusion. The water from the font that has been blessed is poured over the child's head three times while the Priest says the following words: "(Name), I baptise you in the name of the father and of the Son and of the Holy Spirit." The child has now been baptised and is officially a member of the Christian Church. A second anointing on the forehead with the oil of chrism follows the baptism. This oil is a symbol of being chosen for a special task in life. The child is asked to take up the challenge of living according to the values that Christ gave his followers. The child is then clothed in a white garment, which symbolises their new life free of sin. The garment reflects the state of the child's soul: it is now spotless, pure and cleansed of Original Sin. ...read more.

They are then asked if they have repented of their sins and have faith in the Lord Jesus Christ. Each candidate may read a bible passage that is important to them or they may give a testimony explaining how they came to be a Christian and why they want to be baptised. The candidate enters the pool, symbolising leaving their old, sinful life behind them. The candidate and the minister are now in the pool and the minister says "(Name), because you have repented of your sins and have requested baptism, I now baptise you in the name of the Father, and of the Son and of the Holy Spirit. Amen". The candidate is then briefly immersed in the water. This symbolises that their old life has died, and that the Christian is buried in the same way as Jesus was buried for three days. The person leaves the pool, showing their new Christian life has begun. Just as Jesus rose from the dead, the candidate has risen to new life with Christ. Holy Communion often follows the baptism and the believer is given the right hand of fellowship from the minister. The congregation welcomes them as a full member of the Christian Church. ...read more.