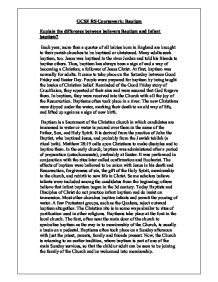 Explain the difference between believers Baptism and Infant baptism?

GCSE RS Coursework: Baptism Explain the difference between believers Baptism and Infant baptism? Each year, more than a quarter of all babies born in England are brought to their parish churches to be baptised or christened. Many adults seek baptism, too. Jesus was baptised in the river Jordan and told his friends to baptise others. Thus, baptism has always been a sign of and a way of becoming a Christian, a follower of Jesus Christ. At first, baptism was normally for adults. It came to take place on the Saturday between Good Friday and Easter Day. People were prepared for baptism by being taught the basics of Christian belief. Reminded of the Good Friday story of Crucifixion, they repented of their sins and were assured that God forgave them. In baptism, they were received into the Church with all the joy of the Resurrection. Baptisms often took place in a river. The new Christians were dipped under the water, marking their death to an old way of life, and lifted up again as a sign of new birth. Baptism is a Sacrament of the Christian church in which candidates are immersed in water or water is poured over them in the name of the Father, Son, and Holy Spirit. ...read more.

"I baptise you in the name of the farther, and of the son and of the Holy Spirit" this shows that now the child is in the presence of God and has become one of the flock. It would now be customary to give the Godparents a candle to symbolize the child's passing from the darkness of sin into the light of God and the Christian family. Moving onto the Believer's baptism the service baptises people as an outward sign that they have willingly turned to Christ. In the believers baptism water is a symbol that Christ has washed away their sins by his death on the cross. The pool which they are submersed in represents Christ's tomb and the submersion represents the death. Then the rising out of the water represents the washing away of the sins and being "born again". The first part of the service will consist of hymns, bible readings and a sermon (talk) by the minister. This will all be linked to leading your life in the path of Christ. Baptism is an act of faith and the minister will explain why the baptism is a way in which the person becomes united with Christ. ...read more.

Some people who have been baptised as infants do not lead Christian lives, therefore if they had been given the choice they may not have chosen to get baptised. Reasons against adult baptism. In the New Testament, Jesus always welcomed children, and infants were baptised, as we are told of whole households being baptised. At first adults were baptised, then Christians wanted their children to be baptised, so they could join the Church and become children of God. Baptising an infant cleanses them from Original Sin, as the Priest says,"O, God you sent your Son to cast out the power of Satan, set this child free from Original Sin."If the child is weak or in danger of dying, then baptising it will allow it to enter Heaven. Infants are baptised, and then are only encouraged by their parents to complete their initiation by getting confirmed at a later stage in their life, therefore they can continue being a Christian, only if they feel want to. For parents, having a baby, they will obviously want their children to follow in their faith and want the best for their child. In conclusion, and in my opinion I don't agree that, "Baptising babies is pointless". I think that babies should be baptised, as it gives them a good starting point in their lives, and God will be there to protect them, and give them strength and faith. ...read more.