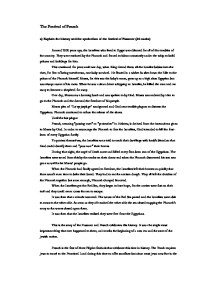 Explain the history and the symbolism of the festival of Passover

The Festival of Pesach a) Explain the history and the symbolism of the festival of Passover (24 marks) Around 3000 years ago, the Israelites who lived in Egypt were blamed for all of the troubles of the country. They were enslaved by the Pharaoh and forced to labour constantly under the whip to build palaces and buildings for him. This continued for years until one day, when King Herod threw all the Israelite babies into the river, for fear of being overthrown, one baby survived. He floated in a wicker basket down the Nile to the palace of the Pharaoh himself. Moses, for this was the baby's name, grew up as a high class Egyptian but was always aware of his roots. When he saw a slave driver whipping an Israelite, he killed the man and ran away to become a shepherd far away. One day, Moses saw a burning bush and was spoken to by God. Moses was ordered by Him to go to the Pharaoh and the demand the freedom of his people. Moses plea of "Let my people go" was ignored and God sent terrible plagues to distress the Egyptians. ...read more.

The Celebration of Pesach The focus of the Festival of Passover is the Seder meal in which the story is retold through symbolism of food, cutlery and the order in which the meal takes place. The preparation however, plays a very important part in the symbolism of the festival. Most of the preparations for the festival take place at home. All chametz -leaven- must be removed from the house. Chametz is a product where any of grains, wheat, barley, rye and oats comes into contact with water for more than 18 minutes. There are two ways in which chametz can be got rid of: * Biur- Burning. The food is destroyed and every room of the house is cleaned to ensure that no chametz is present. * Bitul- Renouncing. The food is sold to a non-Jew and then bought back when the festival has passed. The whole of the kitchen must be fit for Passover. Most Jews will have separate sets of crockery and kitchen utensils for the festival, which are kept locked away for the rest of the year. The food for the Passover must be bought carefully and must have a label saying "food for Passover" or "food for Pesach". ...read more.

* The ten plagues are commemorated with ten drops of wine. This is to remind the Jews that their freedom came at the price of the lives of the Egyptian first-born sons. * Half a matzah is hidden and must be found by the children of the household. Whoever finds it keeps it and holds it to ransom. This remembers the Pharaoh that would not let the Jews go. Only when the matzah has been found can the meal continue. * Jews consider the Egypt of modern times e.g. Nazi Germany- their exodus finally came when the State of Israel was finally declared in 1948. Egypt is wherever Jews are enslaved or treated badly. * At the end of the Seder meal, the Jew's thoughts turn to Israel. A glass of wine is raised and the Jews say "next year in Jerusalem". o For the Orthodox Jews, this expresses a hope that all Jews will be reunited in the State of Israel next year. o For progressive Jews, that Jews shall be able to travel to Israel if the should wish to next year. * The final act is to pour a glass of wine for Elijah and leave the front door open in the hope that he will return to herald the arrival of the Messiah and the Messianic age- a time of peace and justice. ...read more.