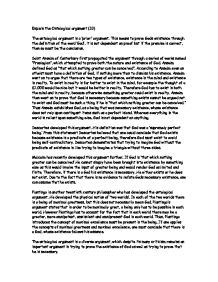 Explain the Ontological argument (33) The ontological argument is a 'priori' argument. This means to prove Gods existence through the definition of the word 'God', it is not dependent on proof but if the premise is correct, then so must be the conclusion. Saint Anselm of Canterbury first propagated the argument through a series of works named "Proslogion", which attempted to prove both the nature and existence of God. Anselm defined God as "that which nothing greater can be conceived". According to Anselm even an atheist must have a definition of God, if nothing more than to dismiss his existence. Anselm went on to argue that there are two types of existence, existence in the mind and existence in reality. To exist in reality is far better to exist in the mind, for example the thought of a �1,000 would be nice but it would be better in reality. Therefore God has to exist in both the mind and in reality, because otherwise something greater could exist in reality. Anselm then went on to prove that God is necessary because something exists cannot be argued not to exist and God must be such a thing if he is "that which nothing greater can be conceived." Thus Anselm establishes God, as a being that was necessary existence, whose existence does not rely upon contingent items such as a perfect island. Whereas everything in the world is reliant upon something else, God is not dependent on anything. Descartes developed this argument. His definition was that God was a 'supremely perfect being.' From this statement Descartes believed that one could conclude that God exists because existence is a predicate of a perfect being, therefore God must exist to avoid being self-contradictory. Descartes demonstrates that trying to imagine God without the predicate of existence is like trying to imagine a triangle without three sides. Malcolm has recently developed this argument further. ...read more.

It can be argued however, that Gods existence is a very different to human's concept and therefore part of Gods plan may allow him to tolerate the existence of evil as a temporary part of his plan. If this is the case, then the God of classical theism may exist. For this reason many Christians have developed theodies to explain that in some way, God allows suffering and evil because it is necessary and essential. Explain Augustine's theodicy St Augustine based his arguments on the bible in particular the creation and fall stories in Genesis. His influencial theodicy is based on the assumptions that evil did not come from God because Gods creation was faultless and perfect and evil coming from elsewhere meant God was justified in allowing it to stay. Augustine started with the point that God is wholly good and created the world free of evil and defects. "All God has made pleased him"; thus evil and suffering were unknown. Augustine then pointed out that it is not possible for God to be responsible for evil because evil is not a substance it refers to something which a thing is lacking; it is a 'privation of good.' Augustine used the analogy of blindness, which is not an entity in itself but an absence of sight. If God cannot have created evil, he traced the presence of evil back to those who have free will; namely angels and human beings. They abused Gods gift of freedom and chose to worship false Gods and idolised 'lesser goods.' He argued that the desire for power was to great for Adam and Eve, who were tempted by Satan, a fallen angle to break Gods command and eat the forbidden fruit. Having established the origin of evil, Augustine went on to demonstrate that suffering is a fully deserved consequence of human sin. Natural evil originated from the loss of order, within nature following the first sin. ...read more.

Roheim, for example states that all humans share broadly the same experiences, it is hardly surprising that we develop myths along the same lines. The common experiences of birth, dependency on parents and the sun, explain the common ideas about rebirth, parent God and Sun Gods. Many religious myths, such as the Mesopotamian legends respond to the social concerns of a particular community, means that it is difficulty to accept they come from a common impulse of mankind. Thus Jung is not justified in postulating an archetype 'instinct from God' from the evidence that people just believe in God. Also there is the problem with atheist. Jung offered a solution that atheism itself is a form of religion. The methodology here could also be criticised as Jung is apparently making a judgement of empirical evidence, but then manipulates any conflicting evidence to his advantage, thus precluding any possibility of his judgement ever being falsified. His judgement hence becomes a necessary truth- but without justification. Jung's theory of religion has often been criticised. Buber, for example was not convinced that experience which stems from the mind as such, is external to the subject, can ever be termed religious, in particular Jung's argument that any archetypal image can be termed as religious has come under fire. If a vision of being trapped in armour, is as religious as a vision of God Jung has failed to preserve the uniqueness of religious experience. He also failed to explain why this time of experience is so distinctive in the minds of the subject. For the same reason, the process of individuation as a religious process has been criticised. If it is governed by the self-archetype it does not have to have anything to do with God. Religious believers would argue that the image of Christ holds more that just a symbol of wholeness that can help balance our minds but it is a symbol of something significant in its own right; the death of the historical person and Son of God, Jesus. Again, Jung fails to explain this extra dimension to religious practice. ...read more.