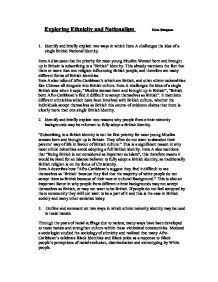 Item A describes how "Afro-Caribbean's suggest they find it difficult to see themselves as 'British' because they feel that the majority of white people do not accept them as British because of their race or cultural Background." This is also an important factor in why people from different ethnic backgrounds may not accept themselves as British, or may not want to be British. If people do not feel accepted by there community they will not want to be a part of it and this is the case in British society and many other societies today. 3. Outline and comment on two ways in which ethnic minority identity may be used to resist racism. Through the years of racial suffrage due to racism, many ways have been developed to resist racism and strengthen culture within these victimized communities. ...read more.

However some of these resistances may not work, for example, Skinheads in Britain have been traditionally known to listening to reggae but are also renowned for racism. Also Hip Hop as a form of racism resistance could have now been ruined as new acts like Eminem; white rappers which are very successful. Many Muslims have been racially discriminated because of their skin colour, however to be a Religion does not consist of being a race, for example a White male could convert himself to Islam and Christians come from many racial backgrounds. Small subcultures, Street culture for example can provoke different types of racism, which may not be aimed at a particular race. Due to the culture of the streets, there are many integrated groups, of no particular race so therefore Racism cannot be resisted by this type of culture and not to forget that some cultures influence racism. ...read more.