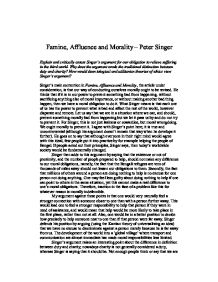 Famine, Affluence and Morality - Peter Singer Explain and critically assess Singer's argument for our obligation to relieve suffering in the third world. Why does the argument erode the traditional distinction between duty and charity? How would deontological and utilitarian theories of ethics view Singer's argument? Singer's main contention in Famine, Affluence and Morality, the article under consideration, is that our way of conducting ourselves morally ought to be revised. He thinks that if it is in our power to prevent something bad from happening, without sacrificing anything else of moral importance, or without making another bad thing happen, then we have a moral obligation to do it. What Singer means is that each one of us has the power to prevent what is bad and affect the rest of the world, however disparate and remote. Let us say that we are in a situation where we can, and should, prevent something morally bad from happening but we let it pass us by and do not try to prevent it. For Singer, this is not just laziness or cowardice, but moral wrongdoing. We ought morally to prevent it. I agree with Singer's point here; it is true and uncontroversial (although his argument doesn't remain that way when he develops it further). He goes on to say that although everyone in their right mind would agree with this ideal, few people put it into practice by for example helping the people of Bengal. ...read more.

No one would have a job because anyone who might have supplied one is now living at subsistence level, having donated his money to the Bengali people. Also, earned income has a value in a moral sense. When everything else seems unsure, an earned luxury is the certain, concrete assurance of your power to obtain good things. It may also be a reward you pay yourself for goals that you have reached. It offers evidence to your senses that your life is good. As a result, although giving most of your money away to the relief fund might be the right thing to do in Singer's eyes, probably not many people would jump for joy at the idea. Furthermore, since Singer holds to his argument so strongly, I wonder if he actually gives away all of his money apart from that which he needs for basic necessities. If not, maybe he is waiting for the rest of the world to sacrifice harder before he starts to worry about his own hypocrisy. Singer's main point in this article is that "the whole way we look at moral issues - our moral conceptual scheme - needs to be altered, and with it, the way of life that has come to be taken for granted in our society." This is a major argument he is putting forward, and would be true if his basis for this point was valid, which I do not think it is. ...read more.

This is where a consideration of a utilitarian viewpoint might be useful. If you were to give money away, whilst sacrificing some of your wealth-acquired luxuries, to the Bengal Relief Fund, maybe you would make one Bengali less hungry for a week, but you would not make him any less poor. Perhaps you would be happy at the thought of helping someone in a dire situation, and a few Bengalis might be happier but for no longer than a week or so. Also, you would of course be less happy as you would be sacrificing some of your luxuries. To promote the greatest happiness among the greatest number of people, as the utilitarian theory goes, one would have to find a way to satisfy the Bengalis' long term needs. What Bengal needs more than anything else is a regime change which will take care of the country's long term needs. This is best left to governments and politicians rather than individuals. The question of how this idea impinges on the Coalition invasion of Iraq is an interesting one. In conclusion, I think Singer means for the best, although I cannot see how his solution is the best possible one. Help the Bengalis, but not by self-sacrifice. Is Singer's real purpose to use self-sacrifice in order to help the Bengalis, or is it to use the Bengali people as a means to effect self-sacrifice? Self-sacrifice seems to me to be the ends, not the means. We could help Singer to achieve his goal by burning money in a bonfire equally as well as by donating money to Oxfam. By Gabriel Kan ...read more.