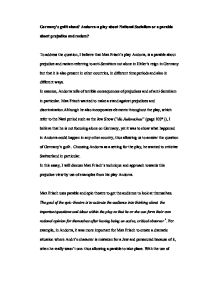 Germany's guilt alone? Andorra-a play about National Socialism or a parable about prejudice and racism?

Germany's guilt alone? Andorra-a play about National Socialism or a parable about prejudice and racism? To address the question, I believe that Max Frisch's play Andorra, is a parable about prejudice and racism referring to anti-Semitism not alone in Hitler's reign in Germany but that it is also present in other countries, in different time periods and also in different ways. In essence, Andorra tells of terrible consequences of prejudices and of anti-Semitism in particular. Max Frisch wanted to make a stand against prejudices and discrimination.Although he also incorporates elements throughout the play, which refer to the Nazi period such as the Jew Show ("die Judenschau" {page 103*}), I believe that he is not focusing alone on Germany, yet it was to show what happened in Andorra could happen in any other country, thus allowing us to answer the question of Germany's guilt . Choosing Andorra as a setting for the play, he wanted to criticize Switzerland in particular. In this essay, I will discuss Max Frisch's technique and approach towards this prejudice view by use of examples from his play Andorra. Max Frisch uses parable and epic theatre to get the audience to look at themselves. ...read more.

Gradually, he assumes the characteristics associated with Jews- he saves money, counts coins and rubs his hands and begins to accept his role as "gesellschaftlicher Jude" ("Wenn sie sehen k�nnten wie sie recht haben;alle weil z�hl ich meine Geld!" {Page 52*}/ "Um sieben muss ich im Laden sein, St�hle verkaufen, Tische verkaufen, Schr�nke verkaufen, meine H�nde reiben" {Page 55/56*}). He completely identifies himself with the Jewish people and in the Nintes Bild, he has excepted his identity as a Jewish martyr ("Ich hab's angenommen. Jetzt ist es an Euch, Hochwurden, euren Jude anzunehmen" {Page 99*}). Andri is not the only one subjected to prejudice in the play. Barblin, who has her head shaved as a Jew's whore ("die Judenhure Barblin" {Page 125*}), shows that she too is a victim of anti-Semitism. The important lesson in Andorra is that anti-Semitism has no justification-it is prejudice and destroys peoples lives by forcing people to doubt themselves and to become outsiders (such as Andri-even though he is not a Jew). Max Frisch, by use of epic-theatre, wants us to think about this on a larger scale-that we should not make images of other people. ...read more.

sehe, unsere Schulul, denn wenn ich meinen Freund an den Henken ausliefere, uber nimmt der Henker Keine Oberschuld3" He is later quoted as saying that the audience should feel guilty, "Die Schuldigen sitzen ja im Parknett, sie, die sagen, dass sie es nicht gewollt haben. Sie, die Schuldig wurden, sich aber nicht mit schuldig Fuhlen. Sie sollen erschrecken, sie sollen, wenn sie das Stuck gesehen haben, nachts wach liegen. Die Mitschuldigen sing uberall4" In conclusion, I believe that Max Frisch's Andorra is a parable of about prejudices and racism as I have outlined above. To reiterate, the important lesson in Andorra is that anti-Semitism has no justification-it is prejudice and destroys peoples lives by forcing people to doubt themselves and to become outsiders. With the writing technique of epic-theatre and parable in use, Max Frisch encourages the audience to have a look at themselves, thus inviting a lesson to be taken from the play. A lot of people will disagree with Max Frisch's approach to playwriting taking the view that theatre is supposed to entertain the public not to lecture. I take this view and believe that when most people go to the theatre, they don't want to watch a morality play-they want to relax. ...read more.