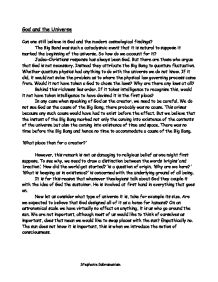 God and The Universe

God and the Universe

Can one still believe in God and the modern cosmological findings?

The Big Band was such a cataclysmic event that it is natural to suppose it marked the beginning of the universe. So how do we account for it?

Judeo-Christians response has always been God. But there are those who argue that God is not necessary. Instead they attribute the Big Bang to quantum fluctuation. Whether quantum physics had anything to do with the universe we do not know. If it did, it would not solve the problem as to where the physical law governing process came from. Would it not have taken a God to chose the laws? Why are there any laws at all?

‘What place then for a creator?’

However, this remark is not as damaging to religious belief as one might first suppose. To see why, we need to draw a distinction between the words ‘origins’ and ‘creation’. ‘How did the world get started?’ is a question of origin. ‘Why are we here?’ ‘What is keeping us in existence?’ is concerned with the underlying ground of all being.

It is for this reason that whenever theologians talk about God they couple it with the idea of God the sustainer. He is involved at first hand in everything that goes on.

Now let us consider what type of universe it is, take for example its size. Are we expected to believe that God designed all of it as a home for humans? On an astronomical scale we have virtually no effect on anything, it is us who go around the sun. We are not important, although most of us would like to think of ourselves as important, does that mean we would like to swap places with the sun? Empathically no.

The sun does not know it is important, this is when we introduce the notion of consciousness.

‘Man is the feeblest reed in existence, but he is a thinking reed… though the universe were to destroy him, man would be more noble than his destroyer, for he would know that he was dying, while the universe, would know nothing of its own achievement.’

Our brain is the most complex structure to be found in the universe. What is more relevant than size is the degree of complexity. Is it perhaps not so absurd to think that God would take a particular interest in us? But does he? Are we really to regard the universe as out natural home?

The depths of space are incredibly cold, that human life is a transitory phenomenon in the cosmos. Yet there is something very peculiar about the universe, about the hostility of the universe to life, which has lead to the Anthropic Principle.

The Anthropic Principle are the laws that make up nature, if we were to imagine we had the responsibility of making up the universe we would have to get all the laws correct. For example, how violent to make your Big Bang? Everything has to be just right, in order for life to evolve. Somehow our universe manages to satisfy every single condition. The chance of this happening would be virtually zero, yet the universe far from seemingly being hostile to life, has seemingly bent over backwards to accommodate life. To this there are three explanations: