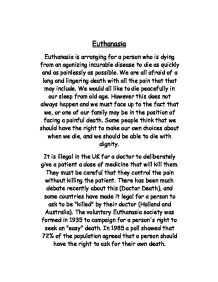 Euthanasia Euthanasia is arranging for a person who is dying from an agonizing incurable disease to die as quickly and as painlessly as possible. We are all afraid of a long and lingering death with all the pain that that may include. We would all like to die peacefully in our sleep from old age. However this does not always happen and we must face up to the fact that we, or one of our family may be in the position of facing a painful death. Some people think that we should have the right to make our own choices about when we die, and we should be able to die with dignity. It is illegal in the UK for a doctor to deliberately give a patient a dose of medicine that will kill them. They must be careful that they control the pain without killing the patient. ...read more.

* can we really tell when it is hopeless as new cures are being discovered all the time ? * it is difficult to change your mind * could voluntary euthanasia help those who have lost their mental faculties ? or are senile ? Most Christians would argue that since life is given by God it is only God who has the right to take life away. However many Christians would argue that since it is possible for modern medicine to keep a person artificially alive there should be the possibility to "turn the machines off" if a person is clinically or brain dead. Euthanasia questions the role that the elderly and handicapped have in our society. Because the care of the elderly is an important part of this, is euthanasia helping people to "die with dignity"? There are some bible references that may help you with your questions on euthanasia. ...read more.

Human beings have a responsibility to care for all life, for everything in the world. The Roman Catholic and the Orthodox churches forbid abortion totally as we can see from the quote above. In the Document on Procured Abortion (1974) the RC church also states "From the time that the ovum is fertilised a new life is begun which is neither that of the father or the mother. It is the life of a new human being with its own growth. It would never become human if it were not human already" Document on Procured Abortion (1974) The Church of England and most of the Protestant churches agree with the Roman Catholic and Orthodox churches in principle but they agree that each case is special. Therefore while abortion is generally not accepted, especially as a method of birth control, it may be permitted in certain cases. 1. If there is a serious risk to the mother's life 2. If conception takes place as a result of rape 3. ...read more.