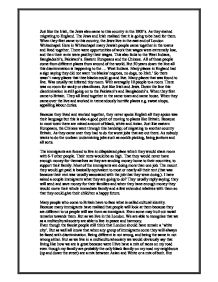 Just like the Irish, the Jews also came to this country in the 1900's. As they started migrating to England. The Jews and Irish realised that it is going to be hard for them. When they first came to this country, the Jews live in the east end of London Whitechapel. Here in Whitechapel many Jewish people came together in the towns and lived together. There were opportunities of work that wages were extremely low, and then their rents were paid by their wages. This also links to the West Indians, Bangladeshi's, Pakistani's. Eastern Europeans and the Chinese. All of these people come from different places from around of the world. But 50 years down the line all this discrimination is happening to the ... West Indians. Many places in England had a sign saying they did not want 'no blacks/ negroes, no dogs, no Irish.' ...read more.

As nobody wants to do the unclean undermining jobs such as cockle picking, being janitors and all sorts. The immigrants are forced to live in dilapidated place which they would share room with 6-7 other people. Their rents would be so high. That they would never have enough money for themselves as they are sending money home to their countries, to support their family. Most of the immigrants are doing more than one job. The mount they would get paid is basically equivalent to most or nearly all their rent (that was because their rent was usually associated with the job that they were doing.). I have asked a couple immigrants what they are going to do? They usually reply saying; they will send and save money for their families and when they have enough money they would move their whole immediate family and a few extended relatives with them so that they could give their child/ren a happy future. ...read more.

are a mix between Asian and White or a mix of both. But when I lived in Stratford. I realised that where ever I went I would always see a different face. But still cultural identity will always be around for what ever possible reason. I think that if everywhere was multi-cultural that we would be able to live in peace and harmony. Then their won't be any racism or fascist people. But we live in the real world, not in the perfect world. But I think in order for the world to change immigrants would always have to go through what is cultural Identity. With the 2nd generation (most of us now) we all choose to be represent our mother countries. For example if someone was to ask me where do I come from; I would always say I am from Ghana even though I was not born there that is just how I would see my self. Cultural identity would always be there no matter what was done. Everybody has to go through. ?? ?? ?? ?? ...read more.