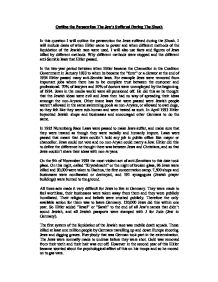 Outline the Persecution The Jew's Suffered During The Shoah.

Outline the Persecution The Jew's Suffered During The Shoah In this question I will outline the persecution the Jews suffered during the Shoah. I will include dates of when Hitler came to power and when different methods of the liquidation of the Jewish race were used. I will also use facts and figures of Jews killed by different methods. Why different methods were stopped and the different anti-Semitic laws that Hitler passed. In the two-year period between when Hitler became the Chancellor in the Coalition Government in January 1933 to when he became the "furer" or a dictator at the end of 1934 Hitler passed many anti-Semitic laws. For example Jews were removed from important jobs where there has to be complete trust between the customer and professional. 70% of lawyers and 50% of doctors were unemployed by the beginning of 1934. Jews in the media world were all pensioned off. He did this as he thought that the Jewish ideas were evil and Jews then had no way of spreading their ideas amongst the non-Aryans. Other inane laws that were passed were Jewish people weren't allowed in the same swimming pools as non-Aryans, or allowed to own dogs, so they felt like they were sub-human and were treated as such. ...read more.

800,000 pairs of shoes were found at Madjanek alone and seven tons of women's hair. Hitler admitted to the death of over a quarter of a million Jews but denied doing anything wrong and said those years will always be thought of as the finest in Germany's history. Some people believe that Hitler didn't start out with a dream of the extermination of the Jewish race and that it just happened. I believe that to kill over a quarter of a million people you can't just accidentally do it, and that all evidence points to it being a well organised, long term act of racism. Outline the Religious Roots of Anti-Semitism In this second question I will be considering how anti-Semitic rumours started up and where they come from. I will split each era into a section, the first of which is the gospels and the Early Church. In this paragraph I will be looking at the bible and thinking about how the Jews are portrayed as "agent's of the devil". The second paragraph will be on the medieval and the middle age era, I will be mainly taking into account the atmosphere and rumours that came about considering how important the church was in modern day life. ...read more.

I disagree with this idea, as I believe that God was with the Jews throughout the pain and suffering that was the Holocaust. I think God wanted to remind the Jews he was there, but because of his gift of free will his idea backfired resulting in the tragic death of six million Jews. Another viewpoint is that of Fackehiem. He does not believe that God was either trying to remind his Jews of the covenant or that He abandon this promise. He says, "God's presence is a mystery that can not be explained. It is not in our power to understand the prosperity of the wicked nor the afflictions of the righteous." When saying this Fackehiem meant that he thinks no human mind can possibly begin to answer the question posed in the title of this section, that the answer is and will remain a great unsolved mystery of life. I also disagree with Fackehiem, as I believe that if we look closely into Jewish history, and the events leading up to the Shoa we will be able to answer the question. Therefor I believe that God started off with an idea to remind the Jews of their promise that he will always be there for them, however because of his gift of free will, he could not stop the tragedy that occurred during the Holocaust. ...read more.