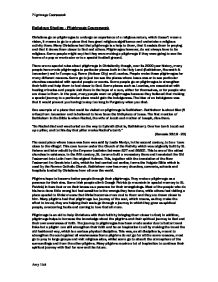 Religious Studies - Pilgrimage Coursework Christians go on pilgrimages to undergo an experience of a religious nature, which doesn't mean a vision, it means to go to a place that has great religious significance and undertake a religious activity there. Many Christians feel that pilgrimage is a help to them, that it assists them in praying and that it draws them closer to God and others. Pilgrimages however, do not always have to be religious. Some people might say that they were making a pilgrimage if they were going to see the home of a pop or movie star or to a special football ground. There are no special rules about pilgrimage in Christianity though, over its 2000-year history, many people have made pilgrimages to particular places both in the Holy Land (Bethlehem, Nazareth & Jerusalem) ...read more.

The first mention of Bethlehem in the Bible is when Rachel, the wife of Jacob and mother of Joseph, dies there. "So Rachel died and was buried on the way to Ephrath (that is, Bethlehem). Over her tomb Jacob set up a pillar, and to this day that pillar marks Rachel's tomb." (Genesis 35:19 - 20) The exact place where Jesus was born was said by Justin Martyr, in the second century, to be a 'cave close to the village'. This cave is now under the Church of the Nativity which was originally built by St. Helena and later rebuilt by the Emperor Justinian between 527 and 565CE. This is one of the oldest churches in existence. In the fifth century, St. Jerome built a monastery there and translated the Old Testament into Latin from the original Hebrew. ...read more.

Pilgrimage is an aid to help Christians with their faith by bringing them closer to God; in addition, pilgrimage helps to increase the knowledge about the pilgrims and their spiritual journey to God and their own awareness of faith. The journey to pilgrimages has been made easier due to better travel links but a pilgrim can still strengthen their faith and be an inspiration to all by making the travel the old fashioned way, which is a serious physical discipline. This was, as all discipline is, meant to strengthen the soul against all weaknesses Some pilgrims do not go for all the same reasons, most go to pray in large groups and visit religious sites, whilst some go to absorb the atmosphere of the surroundings and from the other pilgrims. Many pilgrims receive a lot of inspiration to continue their spiritual journey with God for now and the future. ?? ?? ?? ?? Pilgrimage Coursework Amy Holt ...read more.