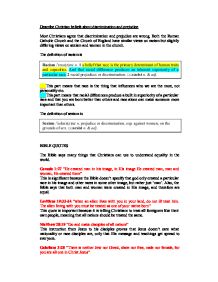 Describe Christian beliefs about discrimination and prejudice Most Christians agree that discrimination and prejudice are wrong. Both the Roman Catholic Church and the Church of England have similar views on racism but slightly differing views on sexism and women in the church. The definition of racism is ___This part means that race is the thing that influences who we are the most, not personality etc. ___This part means that racial differences produce a built in superiority of a particular race and that you are born better than others and race alone can make someone more important than others. The definition of sexism is BIBLE QUOTES The Bible says many things that Christians can use to understand equality in the world. Genesis 1:27 "He created man in his image, in His image He created man, man and woman, He created them" This is significant because the Bible doesn't specify that god only created a particular race in his image and other races in some other image, but rather just 'man'. Also, the Bible says that both man and woman were created in His image, and therefore are equal. ...read more.

CHURCH TEACHINGS Conservative (Roman Catholic) Racism The Conservative churches oppose racism and in 1965, the Roman Catholic Vatican Council announced that there should be no discrimination on basis of 'race, colour, condition in life or religion'. Sexism The Conservative churches are generally against female ordination. This is because they believe that priests should be representatives of Jesus, and Jesus was male, therefore priests should be male too. Also, Jesus' 12 disciples were all male so, again, the leader of a church must be male too. In the Bible, in 1 Corinthians, Paul suggests that women should not be leaders: 1Corinthians 14:33-35 "As in all the congregations of the saints, women should remain silent in the churches. Hey are not allowed to speak, but must be in submission, as the Law says. If they want to enquire about something, they should ask their own husbands at home; for it is disgraceful for a woman to speak in the church." Also in 1 Timothy he suggests that women should not be involved in church: 1 Timothy 2:11-15 "A woman should learn in quietness and full submission. ...read more.

This is because in the Bible, Jesus had high regard for women for example in John 8:1-11, Jesus forgave a woman caught in adultery who was sentenced to stoning. They also believe that the 12 male disciples in the Bible were not literal and only symbols of the 12 regions of Israel and that, really, there was many more followers, some of whom were women. This would mean that priests didn't have to men because the 12 disciples were men. Women are also much better at the caring side of being a priest. The letters from Paul to the church in Corinth and to his friend, Timothy, need to be read in context. The situation in Corinth was very different to our society today and the Corinthians needed strict rules to ring them from a life of sin to a life with God. The Church of England, Methodist and United Reformed Churches allow female priests. In 1992, the Church of England's General Synod allowed female ordination, which caused some Church of England churches to join the Catholic Church. Conclusion My conclusion from this is that, generally, Christians believe that prejudice and discrimination is wrong and the Roman Catholic Church supports their sexism in the church by saying that men and women are equal but different ...read more.