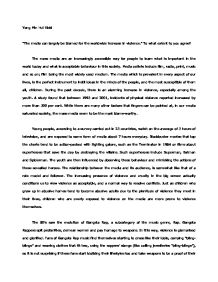 &quot;The media can largely be blamed for the worldwide increase in violence.&quot; To what extent to you agree?

Yong Min Hui Vicki "The media can largely be blamed for the worldwide increase in violence." To what extent to you agree? The mass media are an increasingly accessible way for people to learn what is important in the world today and what is acceptable behaviour in this society. Media outlets include film, radio, print, music and so on; film being the most widely used medium. The media which is prevalent in every aspect of our lives, is the perfect instrument to instil ideas in the minds of the people, and the most susceptible of them all, children. During the past decade, there is an alarming increase in violence, especially among the youth. A study found that between 1993 and 2001, incidents of physical violence reported increased by more than 300 per cent. While there are many other factors that fingers can be pointed at, in our media saturated society, the mass media seem to be the most blame-worthy. Young people, according to a survey carried out in 23 countries, watch on the average of 3 hours of television, and are exposed to some form of media about 7 hours everyday. ...read more.

In this case, the entertainment media, in the form of music, is a propaganda for violence and weapons, making the using of the latter as an act that's "cool" and respectable. The increase of violence in popular entertainment slowly but surely makes it more a norm than ever. When the media inflate the presence of violence, viewers are likely to develop the "mean world" syndrome, a cynical view of the world being dangerous. Research proves that after being exposed to constant violence, one is likely to use it as a release of the build-up of hostility after empathizing with whoever might be the violent protagonist. Also, people undergo a process of desensitization where violent acts affect them less than it should. Violence is taken less seriously and the victims of violence are less empathised with. Hence because of the lowered inhibition and regard for the victims, that people tend to be more aggressive. Our polluted airwaves is polluting the minds of the people. While censors proved their points that there is a detrimental effect of violent media on the people, some others think otherwise. ...read more.

Before, having premarital sex is a taboo, but with the increasing acceptance of promiscuous behaviour, and the release of award-winning television serials such as Sex and the City where it is considered fine not to be able to count how many sex partners one had before, no matter how liberating this might be for women, there is no doubt that the media had allowed or accelerated the acceptance of casual sex. Hence, in the case of violence, it cannot be hard to see the relevance between violent media and crime rates. The prevalence of violence in every society is a sociological problem that one cannot pinpoint or solve. The cause of violence among people is not just one, but an interrelation between many factors such as poverty, dysfunctional families and so on. Violence in the media is not just a reflection of the society we live in, but also a contributor to the increase in violent behaviours around. If portrayed the right way, violence in the media can show us the negative effects of violence, such as in movies about the horrors of war and documentaries of war-torn nations. This can actually steer us away from violent inclinations and emphasize on the importance of non-violence. ...read more.