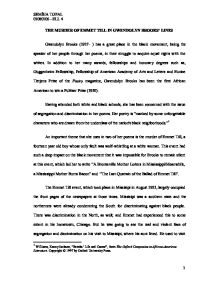 The murder of Emmet Till in Gwendolyn Brooks' Lines

THE MURDER OF EMMET TILL IN GWENDOLYN BROOKS' LINES Gwendolyn Brooks (1917- ) has a great place in the black movement, being the speaker of her people through her poems, in their struggle to acquire equal rights with the whites. In addition to her many awards, fellowships and honorary degrees such as, Guggenheim Fellowship, Fellowship of American Academy of Arts and Letters and Eunice Tietjens Prize of the Poetry magazine, Gwendolyn Brooks has been the first African American to win a Pulitzer Prize (1950). Having attended both white and black schools, she has been concerned with the issue of segregation and discrimination in her poems. Her poetry is "marked by some unforgettable characters who are drawn from the underclass of the nation's black neighborhoods."1 An important theme that she uses in two of her poems is the murder of Emmet Till, a fourteen year old boy whose only fault was wolf-whistling at a white woman. This event had such a deep impact on the black movement that it was impossible for Brooks to remain silent at this event, which led her to write "A Bronzeville Mother Loiters in Mississippi/Meanwhile, a Mississippi Mother Burns Bacon" and "The Last Quatrain of the Ballad of Emmet Till". The Emmet Till event, which took place in Missisipi in August 1955, largely occupied the front pages of the newspapers at those times. Missisipi was a southern state and the northerners were already condemning the South for discriminating against black people. There was discrimination in the North, as well; and Emmet had experienced this to some extent in his hometown, Chicago. But he was going to see the real and violent face of segregation and discimination on his visit to Missisipi, where his aunt lived. He used to visit his relatives every summer and according to his friends in Missisipi, "he was one of those kids who came from 'up North' every summer...because they needed a break from the hustle and bustle of urban life."2 Emmet was a lively and cheerful boy, as if trying to resist the myth that he was naturally inferior to the whites. ...read more.

Being the first winner of the Pulitzer Prize among African Americans, Gwendolyn Brooks used her great talent in poetry to express the feelings of the two major women in this event: the mother of Emmet Till and the white maid, who apparently caused the murder. Brooks reflected the humour of Emmet's mother, Mrs Mamy Bradley, during the burial of her son, in her poem called "The Last Quatrain of the Ballad of Emmet Till". After the murder, After the burial Emmet's mother is a pretty-faced thing; the tint of pulled taffy. She sits in a red room, drinking black coffee. She kisses her killed boy. And she is sorry. Chaos in windy grays through a red prairie. (1960) The dominant colours in this poem are red and black; one representing the blood, the barbarity of racism, and the other representing both the skin colour of the victim and the evil in the action which darkens the future of white and black Americans. Besides, this event clouds the past glories of America by creating a chaos, which means this barbarity is sharply contrasting with the fame of America for being the land of democracy and liberty. This short but effective poem mirrors the feelings of Emmet's mother, who feels chaos, as she had never imagined that her only son, whom she had sent on vacation, would return to her "in a pine box, so horribly battered and water-logged that someone needs to tell you this sickening sight is your son - lynched"11 Until then, she was not aware of the chaotic situation in the South, which was marked with the harsh discrimination against blacks. They were relatively free and 'equal' in Chicago, having a nice apartment and a good job, which were dreamlike for the blacks in Missisipi at those times. "Two months ago I had a nice apartment in Chicago. I had a good job. ...read more.

Emmet's uncle decided to talk in the court against Bryant and Milam, when nobody from Emmet's friends could dare to be a witness in the court. 64 year old Mose Wright identified the defendants as the men who had kidnapped Emmet. Afterward, he said: "it was the first time in my life I had the courage to accuse a white man of a crime, let alone something as terrible as killing a boy."13 When the all-white jury decided that Bryant and Milam were not guilty of murdering Emmet Till, saying that "the state failed to prove the identity of the body"14 With this decision, the South was blamed for approving violence, and Missisipi had become the ultimate symbol of white supremacy. The further verdict, which also found the killers not guilty of kidnapping, fueled the public reaction more. This case showed black people that they should not be afraid of being witnesses testifying against white people in court. Also, the blacks in the North saw that the violence against blacks in the South could effect them as well. So, they decided to rise against all forms of discrimination in the North and the South. Through the contributions of the black poets such as Gwendolyn Brooks, this event has remained in the minds of black people until the present time. However, Brooks was different among them, as she was the only poet that wrote about Emmet Till event through the mouth of the white woman. She enabled us to understand that, although she seemed the winner in this event, actually, the white woman was herself among the losers as well, as she lost her love and confidence in her husband. In her poem, Brooks gave a great lesson to all the opressed and oppressors, by drawing the picture of the white family in the event: discrimination against the "other" not only harms the oppressed but also causes the oppressor to lose their human values, such as love, compassion, and tolerance. ...read more.