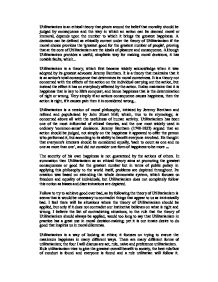 Utilitarianism is an ethical theory that pivots around the belief that morality should be judged by consequence and the way in which an action can be deemed moral or immoral, depends upon the number to which it brings the greatest happiness. A decision can be defined as ethically correct under the theory of Utilitarianism if the moral choice provides the 'greatest good for the greatest number of people', proving that at the core of Utilitarianism are the ideals of pleasure and consequence. Although Utilitarianism provides a useful, simplistic way for making moral decisions, it has notable faults, which... Utilitarianism is a theory, which first became widely acknowledge when it was adopted by its greatest advocate Jeremy Bentham. It is a theory that maintains that it is an action's total consequence that determines its moral correctness. It is a theory not concerned with the effects of the action on the individual carrying out the action, but instead the effect it has on everybody affected by the action. It also maintains that it is happiness that is key to life's conquest, and hence happiness that is the determination of right or wrong. Very simply if an actions consequence causes happiness, then the action is right, if it causes pain then it is considered wrong... ...read more.

There are many different forms of utilitarianism; the four I will discuss are act, rule, naive and preference utilitarianism. Rule utilitarianism tries to give the greatest overall benefit to society, the best rule/law of conduct is found and everyone is found and a rule utilitarian will follow it. However, this can cause problems if you use this rule in a place where it is not generally followed as problems will be caused if you differ from the general population. Another difficulty is that all the best rules would be very complicated and this would make them hard to follow and many... An example of Act utilitarianism: The world is becoming too overcrowded and has at least twice the population it requires to survive; a government could cull billions of people to end this population problem. Act utilitarianism would justify this, as horrible as it would be, because it would have the good result of the world being saved. In my opinion, the best form of utilitarianism is Naive utilitarianism as it probably causes the least amount of suffering. However, all of these forms of utilitarianism exist in the world and are used to justify many decisions, good or bad. I disagree with utilitarianism as a way of ethics because its principles often overlook many vital facts. ...read more.

Utilitarianism is usually connected with the specific doctrines of Jeremy Bentham and John Stuart Mill, who both took the goodness of consequences to be measured by their effect on the happiness of human beings. Bentham was both the founder of utilitarianism and a contemporary of Mill's father, who ensured that his son received a strict utilitarian education based upon Bentham's theories. It is not surprising, then, that aspects of Mill's views on utilitarianism share fundamental similarities with those of Bentham, and also demonstrate a digression from Bentham's earlier perspectives to the further developed and more persuasive arguments characterised by Mill's Utilitarianism. A point of similarity can be drawn between the doctrines of Bentham and Mill in that both philosophers maintain the... The two theories are similar in that they both maintain the existence of external sanctions of morality and agree that pleasure is the ultimate human end. However, Mill deviates somewhat from Bentham's definition of happiness, and took a qualitative stance on the issue, rejecting Bentham's quantitative views. Mill's abhorrence toward Bentham's hedonic calculus necessitated the classification of his Utilitarianism as an idealistic rule utilitarianism, while Bentham's doctrine is distinctly act utilitarianism. Although both Bentham and Mill's theories both possess intrinsic worth, it is evident that Mill's utilitarianism far surpasses Bentham's in persuasiveness, practicality, and intrinsic worth, and finally, is infinitely more philosophically satisfying. ...read more.