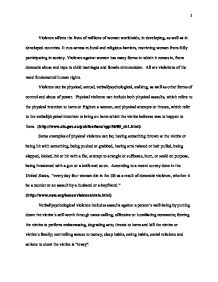 Violence affects the lives of millions of women worldwide, in developing, as well as in developed countries. It cuts across cultural and religious barriers, restricting women from fully participating in society. Violence against women has many forms in which it comes in, from domestic abuse and rape to child marriages and female circumcision. All are violations of the most fundamental human rights. Violence can be physical, sexual, verbal/psychological, stalking, as well as other forms of control and abuse of power. Physical violence can include both physical assaults, which refers to the physical intention to harm or frighten a women, and physical attempts or threats, which refer to the verbal/physical intention to bring on harm which the victim believes was to happen to them. (http://www.aic.gov.au/publications/rpp/56/05_ch1.html) Some examples of physical violence can be; having something thrown at the victim or being hit with something, being pushed or grabbed, having arm twisted or hair pulled, being slapped, kicked, bit or hit with a fist, attempt to strangle or suffocate, burn, or scald on purpose, being threatened with a gun or a knife and so on. According to a recent survey done in the United States, "every day four women die in the US as a result of domestic violence, whether it be a murder or an assault by a husband or a boyfriend." (http://www.now.org/issues/violence/stats.html) Verbal/psychological violence includes assaults against a person's well-being by putting down the victim's self-worth through name-calling, offensive or humiliating comments; forcing the victim to perform embarrassing, degrading acts; threats to harm and kill the victim or victim's family; controlling access to money, sleep habits, eating habits, social relations and actions to show the victim is "crazy". ...read more.

That is 1,397 per day which means that every minute of every day, a women or child in Canada is being sexually assaulted." In many developing countries, women fall victim to traditional practices that violate their human rights. The continuity of the problem has a lot to do with the fact that most of these physically and psychologically harmful customs are closely related to the tradition and culture of society. Furthermore many cultures even allow or at least tolerate a certain amount of violence against women. In parts of South Asia, Western Asia and Africa, for example, men seem to have almost a right to discipline their wives whenever they feel the need to. Even these women sometimes see a certain amount of physical abuse as fair under certain conditions. For example, "80 % of women surveyed in rural Egypt said that beatings were common and often justified, particularly if the women refused to have sex with her partners." (http://www.afrol.com/Categories/Women/wom003_violence_unfpa.htm) Violence against women is a major public health and human rights problem throughout the world. "Worldwide, 20 to 50 percent of women experience some degree of domestic violence." However the problem seems to be the worst in Asia, Africa and the Middle East Countries. In Africa, for example, domestic violence, rape and other sexual abuse and female genital mutilation are part of a separate category of concern. In South Africa, the incidence of rape is thought to be the highest in the world. ...read more.

Women who report sexual and/or domestic violence should have free and frequent access to legal medical exams. Victims of domestic and sexual assault should be treated with fairness, compassion and respect. Quality shelters or other safe spaces for battered women should be established. There, women can find safety and shelter without compromising their personal independence and freedom of movement. In addition support telephone hotlines for women victims of violence, should be made available. These hotlines should be widely publicized and operated by trained staff who can offer basic counseling and refer women to specialized service providers and to shelters. Hotlines for women in detention should be secure and confidential. Society at large, including judges and police officers, must be educated to change the social attitudes and beliefs that encourage male violence. (http://www.hrw.org/backgrounder/wrd/fiveplus.htm) Violence against women happens all the time. Someone we know at this moment could be facing such a problem and we need to know how to help. Fighting violence against women requires challenging the way that gender roles and power relations are expressed in societies. In many countries women have a low status. They are considered as inferior and many men believe that they are superior to them and even have a right to own them. Changing people's attitudes and approach towards women will take a long time, at least a generation and perhaps longer. Nevertheless, raising awareness of the issue of violence against women and educating boys and men to view women as valuable partners in life, in the development of a society and in the achievement of peace are just as important as taking legal steps to protect women's human rights. ?? ?? ?? ?? 1 ...read more.