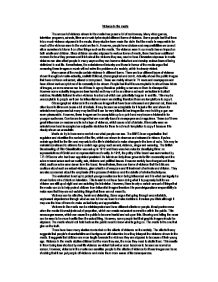 Violence in the media

Violence in the media The amount of violence shown in the media has posed a lot of controversy. Many video games, television programs, adverts, films and music lyrics depict different forms of violence. Some people feel that there is too much violence exposed in the media. Many studies have made the claim that the media is responsible for much of the violence seen in the world we live in. However, people have choices and responsibilities we cannot allow ourselves to blame it on other things such as the media. The violence seen in our media has an impact on both adults and children. Since children are also exposed to various forms of media, there has been additional concern for how they process and think about the violence they see, read or hear. Excessive exposure to media violence can also affect people in many ways as they can become disturbed and develop serious fears of being victimized in real life. Nevertheless, the entertainment industry and those in favour of the media argue that censoring these images or music will not solve the problems of a society, which is already violent. Many areas of the media contain violence in different forms. There are four different types of violence shown throughout media-actuality, realistic fictional, choreographed and comic. Actuality shows the public images that have not been enhanced, altered or composed. These are mainly shown in TV news and newspapers and have stirred various opinions of its necessity to be shown. ...read more.

Moral panics occur when the media blow subjects out of proportion, which can create redundant commotion within the public. This encourages scares, which can cause the public to become fearful and act upon this. Showing and telling the news can be seen to be more horrific than the actual thing. However, some people feel that graphic images should be exposed. The media should not hold back as the public need to know what is going on. The media is the one that give us the truth. There have been many studies conducted on the effects of violence on the society. The effects theory suggests that people's characteristics and background will determine how they interpret the violence shown in the media. It suggests that children are more fragile towards the violence they are exposed to because of their young age. Violence in the media excites children but the more they see, the more they need to excite them. This results in them being less shocked by real life violence as violent behaviour soon becomes to be seen as normal on screen. However, violence in the media can sensitise people to the effects of violence for these images can be so shocking that it can put people off violence and make them more aware of its consequences. Media violence can be used as way to release tension and desires through identification with fictional characteristics and events. According to the catharsis theory, watching violence is healthy because it allows viewers to drain their anger and aggressive impulses into harmless channels. ...read more.

However, although video games can be extremely violent, it can be hard to connect this violence in reality. The content of various video games may offend many people but the violence shown is of a negative light. Video games do not show violence to be acceptable or enjoyable. Nevertheless, video games can still urge people to become aggressive due it violent scenes and therefore there should be stricter censorship to protect influential children. However, it is argued that most violent games are rated 18, it is up to parents under the age of 18 to make sure that they are not getting hold of these games. Violence can not only be blamed on video games, it is also lack of parenting, if it wasn't for video games there will be something else to blame. Song Lyrics are known to promote violence. Many artists use ideas of violence and use aggressive tones in their songs. Bands such as black eyed peas have demonstrated their opinions about this, and they have expressed it through the song, 'Where is the love?' as its lyrics say, 'wrong information always shown by the media, infecting the young minds faster than bacteria.' Media surrounds us and has an impact on everyone's lives in different, big or small ways. The violence it contains still and may always be a big topic of debate. It is difficult to have the right amount of violence shown for everyone as each person has different points of where the line should be drawn. ...read more.