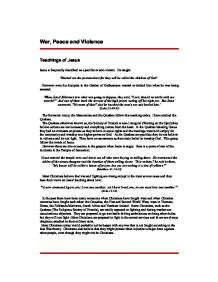 War, Peace and Violence Teachings of Jesus Jesus is frequently described as a pacifist or anti-violent. He taught: 'Blessed are the peacemakers for they will be called the children of God'. However even his disciples in the Garden of Gethsemane wanted to defend him when he was being arrested: 'When Jesus' followers saw what was going to happen, they said, "Lord, should we strike with our swords?" And one of them stuck the servant of the high priest, cutting off his right ear. But Jesus answered, "No more of this!" And he touched the man's ear and healed him.' ...read more.

As the Quakers are pacifists they do not believe in violence and do not fight. They have no sacraments as their main belief to worship God. This group follow the words of Jesus. However there are two occasions in the gospels when Jesus is angry. Here is a quote of one of the incidents in the Temple of Jerusalem: 'Jesus entered the temple area and drove out all who were buying or selling there. He overturned the tables of the moneychangers and the benches of those selling doves. "It is written," he said to them, "My house will be called a house of prayer, but you are making it a den of robbers."' ...read more.

Some Christians, such as the Quakers (The Religious Society of Friends), are totally opposed to fighting and during warfare are conscientious objectors. They are prepared to go into battle driving ambulances or doing other duties but they will not fight. Other Christians are prepared to fight in the armed services and there are always chaplains attached to their military units. Most Christians today would probably not be happy with any war that is not fought according to the Just War theory. Christians also believe that they might protest when injustice is begin done against other people, even though they might not be Christians. Jemma Able 10 LRC Thursday Period 1 and 2 ...read more.