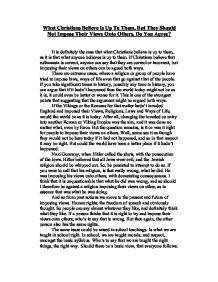 What Christians Believe Is Up To Them, But They Should Not Impose Their Views Onto Others. Do You Agree?

What Christians Believe Is Up To Them, But They Should Not Impose Their Views Onto Others. Do You Agree? It is definitely the case that what Christians believe is up to them, as it is that what anyone believes is up to them. If Christians believe that euthanasia is correct, anyone can say that they are correct or incorrect, but imposing their views on others can be agued both ways. There are extreme cases, where a religion or group of people have tried to impose laws, ways of life even that go against that of the people. If you take significant times in history, possibly any time in history, you can argue that if it hadn't happened then the world today might not be as it is, it could even be better or worse for it. ...read more.

Hitler believed that all Jews were evil, and the Jewish religion should be whipped out. So, he persisted to attempt to do so. If you were to call that his religion, is that really wrong, what he did. He was imposing his views onto others, with devastating consequences. I think that it is unquestionable that what he did was wrong, and so should I therefore be against a religion imposing their views on other, as in essence that was what he was doing. And so from past actions we move to the present and future of imposing views. Human rights; the freedom of speech and obviously thought. So people can say almost whatever they like, and definitely think what they like. If a person thinks that it is right to try and impose their views onto others, who's to say that is wrong. ...read more.

But if there were only one religion allowed to impose their views onto others, convincing the world to follow one religion, on set of laws. Would there be a world peace? The world as it is, is divided by religion among other things. In my view, it'll never happen. To be honest, the world would be so boring if everyone were united in religion and thought. Every day, people disagree, which on a small scale is someone trying to impose their view on someone else. Christians should not be allowed to impose their views violently, or be pushy about it, but if anyone ever wanted to change something, making a suggestion was the evolution of man. A view could be classed a thought, and so there has to be some level of imposing a view onto another passively. As long as there is no violence. ...read more.