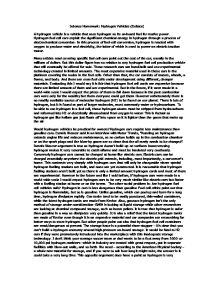 A hydrogen vehicle is a vehicle that uses hydrogen as its on-board fuel for motive power. Hydrogen fuel cell cars exploit the significant chemical energy in hydrogen through a process of electrochemical conversion. In this process of fuel-cell conversion, hydrogen is reacted with oxygen to produce water and electricity, the latter of which is used to power an electric traction motor.

Many articles read covering specific fuel cell cars point out the cost of the car, usually in the millions of dollars. But this dollar figure has no relation to any hydrogen fuel cell production vehicle that will eventually be offered for sale. These research cars are hand-built and use experimental technology created in limited amounts. The most expensive material used in these cars is the platinum covering the nodes in the fuel cells. Other than that, the car consists of motors, wheels, a frame, and body. And there are even fuel cells under development using different, cheaper materials. Evaluating this I would say it is fair that hydrogen fuel cell cards are expensive because there are limited amount of them and are experimental. But in the future, if it were made in a world-wide scale I would expect the prices of them to fall down because in the past combustion cars were only for the wealthy but them everyone could get them. However unfortunately there is no readily available source of molecular hydrogen (H2)

Hydrogen in cars is less dangerous than gasoline. Fuel cell critics point out that hydrogen is flammable, but so is gasoline. Unlike gasoline, which can pool up and burn for a long time, hydrogen dissipates rapidly. Gas tanks tend to be easily punctured, thin-walled containers, while the latest hydrogen tanks are made from Kevlar. Also, gaseous hydrogen isn't the only method of storage under consideration--BMW is looking at liquid storage while other researchers are looking at chemical compound storage, such as boron pellets. It is true that hydrogen is safer than gasoline in a way as dissipates very quickly. It is also a relief that the latest hydrogen tanks are made of Kevlar even though it is an expensive material and car companies are researching for better ways to store hydrogen. But other people point out also that hydrogen fuel cell containers are weak/dangerous at present. The storage issue is a potential show-stopper – it's clear that you can't build a hydrogen economy around high-pressure on-board storage. It would be fatal to H2 cars if they were prematurely introduced into the marketplace with this inadequate storage technology. I don't think your average soccer mom or dad wants to be a foot away from 5000- or 10,000-psi hydrogen canisters--which in industry are treated with great respect, put in separate facilities with blow-out walls, and so forth.
...read more.

So my final message is many people know hydrogen is clean but  hydrogen vehicles might sound dangerous at first because of its damaging properties, however since it is just newly come out and is experimental we must have faith that further in the future it would be greatly improved.