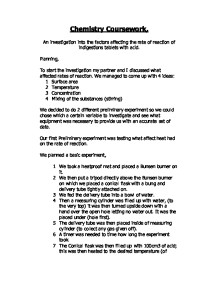 Chemistry Coursework, An investigation into the factors affecting the rate of reaction of indigestions tablets with acid. Planning, To start the investigation my partner and I discussed what affected rates of reaction. We managed to come up with 4 ideas: 1 Surface area 2 Temperature 3 Concentration 4 Mixing of the substances (stirring) We decided to do 2 different preliminary experiment so we could chose which a certain variable to investigate and see what equipment was necessary to provide us with an accurate set of data. Our first Preliminary experiment was testing what affect heat had on the rate of reaction. We planned a basic experiment, 1 We took a heatproof mat and placed a Bunsen burner on it. 2 We then put a tripod directly above the Bunsen burner on which we placed a conical flask with a bung and delivery tube tightly attached on. 3 We fed the delivery tube into a bowl of water. 4 Then a measuring cylinder was filled up with water, (to the very top) it was then turned upside down with a hand over the open hole letting no water out. It was the placed under (hole first). 5 The delivery tube was then placed inside of measuring cylinder (to collect any gas given off). 6 A timer was needed to time how long the experiment took. ...read more.

-A bowl was the filled with water and a bung connected to a delivery tube was held over the chonical flask. The end of the delivery tube was then placed under the bowls water. -A measuring cylinder was then filled to its maximum capacity with water. It was then covered by hand and tipped upside down and placed under the bowl's water, the water all remains in the tube and allowed us to measure the gas given off. -The tablet was dropped in an immediately we sealed the bung onto the chonical flask. At the same time a stopwatch was started to record the time taken. When all signs of the carbon dioxide being given had stopped (no more fizzing and the tablet being no-longer visible in solution) we stopped timing and then recorded our results. *concemtration prelim table of results We decided that we should use concentration because the preliminary experiment worked well and so with improvements to the equipment we would be able to produce some accurate results. The changes we decided we wanted to the equipment were to: * Change tap water to distilled water for experiment. * Instead of half tablet use a whole one (otherwise surface area may vary per tablet die to cut in tablet). * Use a burette not a measuring cylinder to measure out the different quantities of acid and water. ...read more.

Prediction, We can predict what will happed because of the collision theory. The collision theory means that as the concentration is varied higher for the acid, more collisions will take place; this means that the rate of reaction will be higher. I think that as you increase the concentration more particles will be contained in the same volume of solution. This means that there will be more acid particles to indigestion tablet particles, so the particles will have to travel shorter distance to collide and will be easier to find. I predict that at the beginning of the experiment (at 20%) there may not actually be enough acid to react with all the tablet and if there is enough it will be in the same volume of the others, so particles will have to travel further to collide as the particles are more spread out in the solution. However, if you take a more concentrated acid like 60% then there will be more particles in the same volume of acid. This means there may be a left over amount of particles after the acid and indigestion tablet has reacted. It also means that the particles will have to travel less far and it will be easier to find another particle to react with therefore making the rate of reaction faster. Although very hard to predict the actual rate of the reaction it is not too hard to predict the gradient of a graph produced from this type of experiment. Method, ...read more.