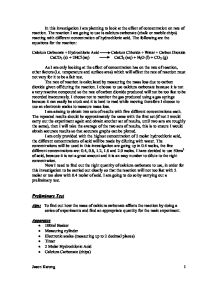 Affect of concentration on reaction

In this investigation I am planning to look at the effect of concentration on rate of reaction. The reaction I am going to use is calcium carbonate (chalk or marble chips) reacting with different concentration of hydrochloric acid. The following are the equations for the reaction: Calcium Carbonate + Hydrochloric Acid Calcium Chloride + Water + Carbon Dioxide CaCO3 (s) + 2HCl (aq) CaCl2 (aq) + H2O (l) + CO2 (g) As I am only looking at the effect of concentration has on the rate of reaction, other factors (i.e. temperature and surface area) which will affect the rate of reaction must not vary for it to be a fair test. The rate of reaction is calculated by measuring the mass loss due to carbon dioxide given off during the reaction. I choose to use calcium carbonate because it is not a very reactive compound so the rate of carbon dioxide produced will not be too fast to be recorded inaccurately. I choose not to monitor the gas produced using a gas syringe because it can easily be stuck and it is hard to read while moving therefore I choose to use an electronic scales to measure mass loss. I am aiming to obtain two sets of results with five different concentrations each. The repeated results should be approximately the same with the first set (if not I would carry out the experiment again and obtain another set of results, until two sets are roughly the same), then I will take the average of the two sets of results, this is to ensure I would obtain accurate results so that accurate graphs can be plotted. I am only provided with the highest concentration of 2 molar hydrochloric acid, the different concentrations of acid will be made by diluting with water. The concentrations will be used in this investigation are going up in 0.4 moles, the five different concentrations are: 0.4, 0.8, 1.2, 1.6 and 2.0 moles. ...read more.

5. Place the conical flask with a bit of cotton wool (enough to be used as a plug) on the weigh. 6. Put CaCO3 in acid, then press 'tare' so reading returns to 0, start timer simultaneously. 7. Record reading for every 5 seconds. 8. Stop once 10 readings have been obtained. 9. Repeat to obtain another set of results. N.B. Safety goggles must be worn during experiment and be careful with hydrochloric acid. Theory A reaction will only take place if the two particles collide with sufficient force to break the bonds of the reactants, so new bonds can be formed. When breaking bonds, energy is taken in so it is endothermic; whereas forming bonds give out energy so it is exothermic. The minimum force required to break these bonds must be higher than the activation energy of the reactant; only a certain proportion of collisions will have this necessary energy. Other particles collide without enough energy would not result to a reaction. Energy can be put in by heating the particles. The activation energy can be lowered by adding a catalyst (as graph shown below). A catalyst is a substance which speeds up a reaction by lowering the activation energy; this means the proportion of collisions, which will have enough energy to overcome the activation energy has increased. At the same time the catalyst is chemically unchanged, which means it can be retrieved at the end of reaction. In common reactions, transition metals and their compound are good catalysis. Also for a reaction to occur, the colliding particles must be lined up with the correct orientations. In this way the particles can exchange places, forming new compounds. Effect of concentration on reactions Higher concentrated acid react faster then more diluted acid. This is due to higher concentrated acid has more reactant particles (H+ in hydrochloric acid) in a certain volume. More reactant particles mean more collisions, which gives a greater chance for the particles to collide with force greater than the activation energy and line up in correct orientation, result in more reactions. ...read more.

This could be caused when I used a different bottle of hydrochloric acid after the first one was used up; the second bottle could be slightly more concentrated than the first, consequently the reactions were slightly quicker. There is an anomaly on the graph, line 2.0M the third point is slightly higher then where it should be. This error could have been done if I have misread the digits on the scales, late at taking the reading, movement of table or other environmental factors. I can conclude from this experiment that higher concentrated hydrochloric acid reacts faster with calcium carbonate. As the graphs are shown higher the concentration, less time it takes to reach high up on the graph. The graphs also show all the different concentrated acid has been neutralised, as they all level out at different heights, which also tells us more concentrated acid react with more calcium carbonate. I could improve my method by using same concentration of acid. In analysis, there was an unknown trend caused by the 2.0M point. To improve this I would extend the experiment with larger range of concentration. And also the first reading is the most important, so if we decrease the surface area of the reactant, instead of using grid up calcium carbonate, we can use uniformed size digestive tablets, which react slower we can be more accurate or use less concentrated acid. Further more I could have carried the experiment in a water bath as a temperature control for a more accurate measure, as this reaction is an exothermic reaction the temperature would increase slightly, this can cause the rate of reaction to increase, affecting the results. By including a temperature control, the temperature would be constant and so only the concentration of acid would affect the reaction rate. I could support my conclusion by carrying out other experiments, reacting different concentrations of acid with different metals or metal carbonates to see if they all have same trend lines and behaves in similar ways. ?? ?? ?? ?? 1 Jason Kwong ...read more.