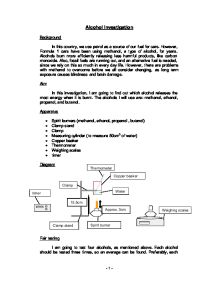 Alcohol investigation Background In this country, we use petrol as a source of our fuel for cars. However, Formula 1 cars have been using methanol, a type of alcohol, for years. Alcohols burn more efficiently releasing less harmful products, like carbon monoxide. Also, fossil fuels are running out, and an alternative fuel is needed, since we rely on this so much in every day life. However, there are problems with methanol to overcome before we all consider changing, as long term exposure causes blindness and brain damage. Aim In this investigation, I am going to find out which alcohol releases the most energy when it is burnt. The alcohols I will use are: methanol, ethanol, propanol, and butanol. Apparatus * Spirit burners (methanol, ethanol, propanol, butanol) * Clamp stand * Clamp * Measuring cylinder (to measure 50cm3 of water) * Copper beaker * Thermometer * Weighing scales * timer Diagram Fair testing I am going to test four alcohols, as mentioned above. Each alcohol should be tested three times, so an average can be found. Preferably, each alcohol should be repeated until consistent results are found, however, this may take a longer time than that which is available to do the experiment. I shall carry out a preliminary test to determine flame size, time to keep the spirit burners lit etc. Control variables * Flame size * Distance of beaker from/ above flame * Volume of water * Quick extinguishments of flame * Same atmosphere/ room temperature If these factors are not kept the same, it would make the experiment unfair, as the results would be different. ...read more.

3. It would have been easier to draw a regression line with more points to link/ see a trend between. This would help to estimate the heat of combustion of alcohols with different molar masses. Also, more trials would have been better, but I did not have a sufficient amount of time to keep repeating the experiments. Plus, it was hard to determine if the end of the wick was actually in the alcohol; the alcohol may not actually have been burned. This would have altered the results, as it would change the overall outcome if used in the result table. There were not any anomalous results on my graph. However, the end temperature, and the temperature difference, in the third trial for propanol was irregular, as it is over ten degrees cooler than the other results for propanol. This result may be unusual because the flame size was smaller than the other trials. Also, I had another trial for ethanol, but the results were extremely unusual, which I think was mainly caused by the flame size. I decided not to include these results in the experiment, as it may have considerably affected the calculations. I would also like to mention that there is some inaccuracy, since most of my calculations were in whole numbers; my highest was to two d.p. Further work relating to this experiment could include seeing how long it takes for each alcohol to heat water to a certain temperature/ by a certain amount. For this, I would predict that the alcohols with the most carbon atoms would heat the water in the least amount of time. - 1 - ...read more.