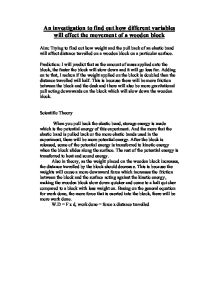 An investigation to find out how different variables will effect the movement of a wooden block.

Aim: Trying to find out how weight and the pull back of an elastic band will affect distance travelled on a wooden block on a particular surface.

Prediction: I will predict that as the amount of mass applied onto the block, the faster the block will slow down and it will go less far. Adding on to that, I reckon if the weight applied on the block is doubled then the distance travelled will half. This is because there will be more friction between the block and the desk and there will also be more gravitational pull acting downwards on the block which will slow down the wooden block.

There will definitely be safety precautions to take when doing this experiment.

Based on the preliminary experiment, the investigation to find out how different amounts of elastic bands which was used to propel the wooden block affected the total distance travelled. But since there wasn’t sufficient space in the lab to undergo this experiment the investigation failed to achieve any usable results. This was because the block slid too far and recordings would’ve been inaccurate as there will be a gap between two joining tables, so the variable will be the weight in the proper investigation.

Below are the graphs for the three test results and the average of the three tests results, which has been done on the computer to show the precise accuracy of the numbers.

In my prediction I said that the block would slow down quicker if more mass was applied on it.

There were definitely some human errors and apparatus problems through put the experiment. The elastic band may have not been pulled back enough or even pulled back too much. The elastic band also may’ve stretched past its elastic limit which will cause a slight change in results. The surface of the desk is also important, as there will be graffiti marks and pen marks. But as my graph shows quite a smooth curve, meaning the errors would’ve been fairly minor.