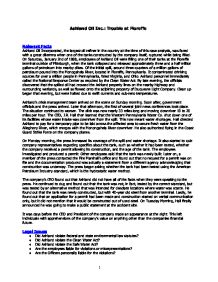 Ashland Oil Inc.: Trouble at Floreffe Relevant Facts Ashland Oil Incorporated, the largest oil refiner in the country at the time of this case analysis, was faced with a great dilemma when one of the tanks constructed by the company itself, ruptured while being filled. On Saturday, January 2nd of 1988, employees of Ashland Oil were filling one of their tanks at the Floreffe terminal outside of Pittsburgh, when the tank collapsed and released approximately three and a half million gallons of petroleum into nearby dikes. Of the initial spill, around three-quarters of a million gallons of petroleum poured into the Monogahela River, located in Floreffe, Pennsylvania. It contaminated drinking sources for over a million people in Pennsylvania, West Virginia, and Ohio. Ashland personnel immediately called the National Response Center as required by the Clean Water Act. By late evening, fire officials discovered that the spilled oil had crossed the Ashland property lines on the nearby highway and surrounding wetlands, as well as flowed onto the adjoining property of Duquesne Light Company. Clean up began that evening, but were halted due to swift currents and sub-zero temperatures. Ashland's crisis management team arrived on the scene on Sunday morning. Soon after, government officials and the press arrived. Later that afternoon, the first of several joint news conferences took place. The situation continued to worsen. The slick was now nearly 33 miles long and moving downriver 10 to 20 miles per hour. The CEO, J.R. Hall then learned that the Western Pennsylvania Water Co. shut down one of its facilities whose water intake was downriver from the spill. This now meant water shortages. Hall directed Ashland to pay for a temporary pipe to be laid across the affected area to secure fresh water from the Allegheny River, which merges with the Monongahela River downriver. He also authorized flying in the Coast Guard Strike Force on the company planes. ...read more.

They had sprayed oil on the welds inside the tank and then vacuum suctioned the outside to determine whether any oil could be pulled through possible leaks in the weld. This is the testing model presented by 650 for desolate locations with scarce water supplies. Again, Ashland was very negligent in the construction of the tank in question. "State and city law requires that a permit be obtained from the Fire Bureau for the construction of any object". [1] Ashland Oil had said in the initial press release that they had obtained the said permit. The Fire Bureau was contacted and they had no such record of the permit. Upon research from inside the company, it was established that the permit was said to have been obtained but no employee of the company had actually received the permit that would have allowed for the construction of the tank. When the oil tanker collapsed, it caused a sequence of reactions that had a major impact outside the bounds of Ashland. It put the water supply of over a million people at risk. Because it was such a major environmental issue, putting the safety of citizens at risk, it became an issue of federal concern. The Comprehensive Environmental Response, Compensation, and Liability Act (CERCLA) created the Superfund for environmental cleanup. The EPA was dispatched immediately, and the federal government stepped in to coordinate the cleanup, using Ashland employees. The liability for cleanup was legally appointed to Ashland, since they were the owner-operators of the hazardous site. Another act of negligence on behalf of the company was there first statement of the extent of the spill. When asked to determine whether the spill had reached the river, one employee merely walked to the waters edge and used a flashlight to determine whether or not there was oil on the water. The company should have had a scientific method for determining the presence of the material in question. ...read more.

Press Release B thanks the workers cleaning up the spill and tells the public what they are doing to clean it up. It also states that employees may have given out inaccurate information and that the company is investigating the allegations raised. Neither press releases are bad with it merits and negative repercussions, but Press Release A publicly admits wrongdoing opening the issues for further scrutiny with potential legal and criminal repercussions. The CEO was not prepared to unleash the skeletons resulting from Press Release A, therefore, Press Release B is the proper release to use. As far as a suitable press release, I would create a very similar one to Press Release B. This one seems to be good legally and ethically. It does not give away privileged information or give misrepresentations. I would expand more on what its efforts consisted of. I would also have those involved with the clean up along with a company spokesperson to field questions as subject matter experts. Overall, my press release would not admit to any liability. Conclusion Ashland Oil showed a great deal of negligent in regards to the oil spill. Their negligence began with the construction of the tank and grew as the oil spill continued. The attempted to show no responsibility or blame for what had happened with the construction of the tank. Nor where they ready for an incident of this magnitude. The company showed malfeasance in dealing with the issues at hand and most of the issues could have been alleviated had they taken proper care in the construction of the failed tank. Ashland Oil's response to the incident was very slow. The company's response indicated that it had governmental guidelines to respond to an incident of this nature, but none of its own standard operating procedures for crisis response. This crisis highlighted the company's lack of internal conduct and safety operating procedures for checks and balances of its industries. Furthermore, this incident showed a lack of policy and involvement by government agencies. These agencies should have taken active roles through continual inspections and verifications of the plants operations. ...read more.