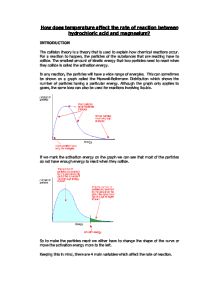 How does temperature affect the rate of reaction between hydrochloric acid and magnesium?

The collision theory is a theory that is used to explain how chemical reactions occur. For a reaction to happen, the particles of the substances that are reacting have to collide. The smallest amount of kinetic energy that two particles need to react when they collide is called the activation energy.

In any reaction, the particles will have a wide range of energies.  This can sometimes be shown on a graph called the Maxwell-Boltzmann Distribution which shows the number of particles having a particular energy. Although the graph only applies to gases, the same idea can also be used for reactions involving liquids. 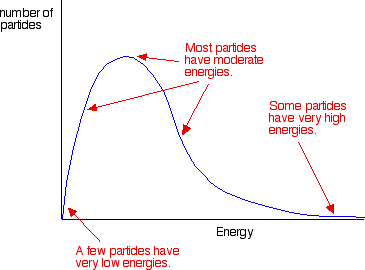 If we mark the activation energy on the graph we can see that most of the particles do not have enough energy to react when they collide. 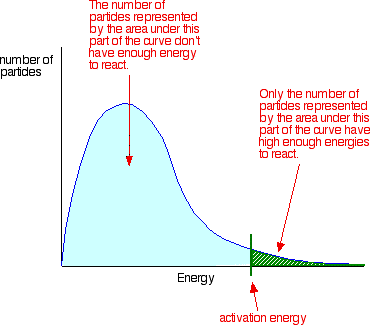 So to make the particles react we either have to change the shape of the curve or move the activation energy more to the left.

Keeping this in mind, there are 4 main variables which affect the rate of reaction.

The first two variables do not affect the Maxwell-Boltzmann Distribution.  The way they increase the rate of reaction is by increasing the probability of a collision.  If the concentration of a solution is increased then there are more reacting particles in the same volume and so there is a greater chance of them colliding with each other.  Similarly, if the reacting particles are bigger, then there is a greater chance they will collide.

However, the last two variables do affect the Maxwell-Boltzmann Distribution.  The use of a catalyst provides a different path for the reaction which has a lower activation energy.  Therefore, a catalyst moves the activation energy to the left on the curve. 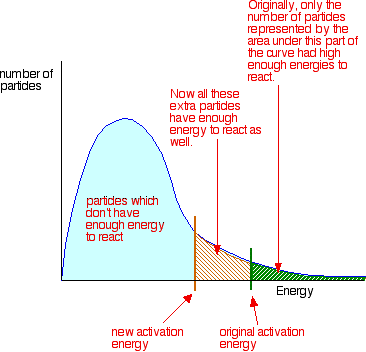 During this investigation I will be concentrating on how temperature affects the rate of reaction. At higher temperatures, particles have more kinetic energy and move around faster. This should have two main effects:

Based on what I have discussed above, my hypothesis is:

The higher the temperature the greater the rate of reaction.

In order to investigate my hypothesis I will look at the reaction between hydrochloric acid and magnesium, and how it is affected by temperature. This is the equation for this reaction:

The equipment needed for this experiment is:

The chemicals needed for this experiment are:

The diagram below shows how the equipment will be set up:

In order to make this a fair test I will make sure that all other variables are kept the same.  Therefore the quantity and concentration of hydrochloric acid will be kept the same at 10cm3 and 1.5 M.  Also, the length of the magnesium ribbon will remain constant at 30mm.

I will also take a number of safety precautions to make sure that nobody is injured:

Below is a table showing the results from the experiment. The table records the time taken for the magnesium to completely dissolve in the hydrochloric acid at each temperature.  The average time at each temperature was calculated as follows:

The results on this table show us that the higher the temperature the faster the reaction.

This table of results gives me the impression that I did the first experiment slightly wrong. This is because compared to experiments 2 and 3 the temperature at 20 °C in experiment 1 is 72 °/75 ° higher.

This can be seen more clearly on the graph, which is a line of best fit through the points. 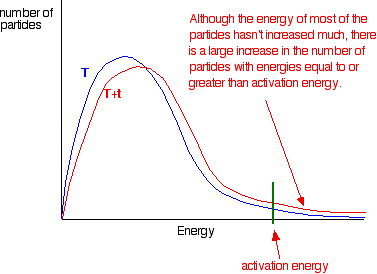 It is easy to see that in the graph labelled T+t there is a large increase in the number of particles with energy greater than the activation energy.  Therefore, when they collide, they will react.  This results in an increase in the rate of reaction.

Overall I feel this experiment went well. This is because the findings of the investigation are consistent with existing knowledge of how reactions occur. However, there is one anomalous result from the experiment. This anomalous result is the time of reaction at 20°C.  At this temperature the rate of reaction was slower than would be expected from the graph.  Looking at the table of results the error that caused the anomaly appears to have come in the first experiment at that temperature.  In fact, if we were to ignore that first result, then the average time of reaction would have been 232 seconds, which would have fallen exactly on the line of best fit. There are a number of possible reasons for this error. For example, the temperature could have been lower than measured, or there might have been less then 10cm³ of hydrochloric acid or the magnesium ribbon strip could have been longer than 30mm.

Although I think the experiment was an overall success, if I were to repeat it I would change a few things. I would have redone the experiment using a wider range of temperatures. Also I would have liked to expand the experiment by looking at some of the other variables as well, such as the concentration and surface area of reactants.