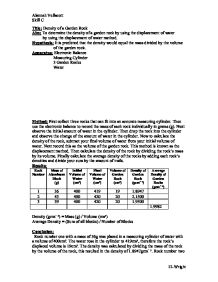 Density of a Garden Rock

Title: Density of a Garden Rock Aim: To determine the density of a garden rock by using the displacement of water by using the displacement of water method. Hypothesis: It is predicted that the density would equal the mass divided by the volume of the garden rock. Apparatus: Electronic Balance Measuring Cylinder 3 Garden Rocks Water Method: First collect three rocks that can fit into an accurate measuring cylinder. Then use the electronic balance to record the mass of each rock individually in grams (g). Next observe the initial amount of water in the cylinder. Then drop the rock into the cylinder and observe the change of the amount of water in the cylinder. Now to calculate the density of the rock, subtract your final volume of water from your initial volume of water. Next record this as the volume of the garden rock. ...read more.

Another source of error would be to observe the volume of water incorrectly. To improve this in accuracy, make sure to read the amount of water in the cylinder by taking the measurement from the bottom of the meniscus. This can be achieved by becoming eye level with the meniscus and also by asking a friend to check to see if you read the meniscus properly. Another source of error could be a miscalculation of the volume, density or average density of the garden rocks. To improve the accuracy of your calculations, write down each figure to multiply, divide or add with appropriate labels in your table. Next, take your time performing the necessary calculations slowly on a calculator. To make sure the calculations are correct, have a friend check it over with a different calculator. ?? ?? ?? ?? Alannah Vellacott Skill C 12-Wright ...read more.