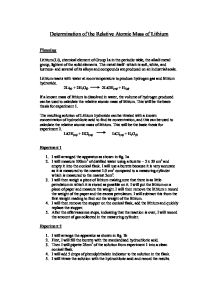 Determination of the Relative Atomic Mass of Lithium

This source of inaccuracy can be reduced by using a different apparatus to measure the amount of gas produced like a syringe. Experiment 2 * I used the solution from experiment 1 thus all the inaccuracies from experiment 1 would contribute to the overall inaccuracy in experiment 2. This can be reduced by making experiment 1 as accurate as possible or by using accurate industry manufactured lithium hydroxide solution. * The hydrochloric acid I used was supposed to be a certain concentration. If however, its concentration wasn't exactly as we were informed, then this would introduce a big inaccuracy in my experiment. * Although the pipette is quite accurate, human error while measuring a specific amount of the solution from experiment 1 might make the reading inaccurate. This can be solved by practice on the part of the one carrying out the experiment. * Titration of the solutions is also prone to human error. Practice can reduce this error margin n so can repeating the titration several times to find an average, which should be more accurate than the individual results. While the lithium is stored, the surface will slowly react with air forming lithium oxide. This will have the effect of increasing the weight of the lithium because the relative atomic mass of oxygen is 16g mol-1, more than double that of lithium, 6.9g mol-1. Thus a lithium atom is much lighter than a lithium oxide molecule. ...read more.