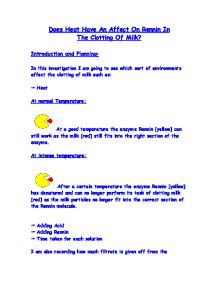 Does Heat Have An Affect On Rennin In The Clotting Of Milk?

Does Heat Have An Affect On Rennin In The Clotting Of Milk? Introduction and Planning: In this investigation I am going to see which sort of environments affect the clotting of milk such as: ? Heat At normal Temperature: At a good temperature the enzyme Rennin [yellow] can still work as the milk [red] still fits into the right section of the enzyme. At intense temperature: After a certain temperature the enzyme Rennin [yellow] has denatured and can no longer perform its task of clotting milk [red] as the milk particles no longer fit into the correct section of the Rennin molecule. ? Adding Acid ? Adding Rennin ? Time taken for each solution I am also recording how much filtrate is given off from the experiment(s). After collecting the data I will then plot an easy to explain graph/series of graphs showing my findings from the experiment. Equipment list: * Hydrochloric acid (1 Molar) * Rennin * Thermometer - To help keep temperature constant. * Stopwatch - To keep Track of time solution is left. * Milk * Measuring cylinder * Beaker - For containing water and solution samples * Test tubes - For containing the actual solution * Syringes of different sizes - For measuring out the ingredients before adding to the solution. Method Plan: * Measure out amount of required Acid 0.3ml (Hydrochloric Acid 1 molar) ...read more.

Another problem with if too much acid was used was that, the milk clotted too much, and if not enough was used, then the milk would barely clot. Prediction- I predict that from this experiment I will find I am correct in assuming that heat does in fact, affect how much milk is clotted in a given time, but only after reaching the optimal temperature as this denatures the enzyme known as Rennin stopping it from clotting the milk. My reasoning for believing this is that over a certain temperature an enzyme such as Rennin would clearly denature and be unable to perform its task as normal. Another reason for me believing this is that in an acidic environment the rennin would be able to perform it's job better as the Hydrochloric acid is simulating the acid found in the digestive system of the human body [located in the stomach] which means that the rennin should be able to perform it's job almost as well if not just as well as if it was inside the stomach. Yet with no acid at all, the rennin would almost certainly be unable to perform as well as it would when working with the acid because it would not be like it's own natural environment for performing the task. Observation Detailed Method- * Measure out Hydrochloric acid and Rennin ready for use in solution to be placed into a test tube. ...read more.

Theses anomalies can be found in the scale of 50-60, 60-70 & 70-80 as these results seem to show a sudden drop. Personally I believe that my method was good and correct for this procedure but could still be altered further still to get even better results. My reasoning for choosing to say that my method was correct is that after my preliminary work I changed my method to a more suited one and stuck with it throughout the investigation which was a success so I concur that my method was reliable in this instance. I believe that I have enough evidence to draw a fair conclusion as all my results and graphs show that throughout the investigation my prediction remained true and consistent which was that the heat would indeed affect the rennin in performing it's task of clotting the milk and creating curds and whey. The ways in which I could improve my method are simple yet effective, for instance I could change these factors: ? Leaving the solution for longer periods at each stage for performing its task(s) so as to get the best possible results. ? Keeping a closer eye on how much of each ingredient is added to the solution and having more than one beaker at a time so as to be able to help keep the temperature constant. Those would be the only factors that I would personally change in order to get the most fair, accurate and true results from my investigation. ...read more.